Caiden’s planet is destroyed. His family gone. And, his only hope for survival is a crew of misfit aliens and a mysterious ship that seems to have a soul and a universe of its own. Together they will show him that the universe is much bigger, much more advanced, and much more mysterious than Caiden had ever imagined. But the universe hides dangers as well, and soon Caiden has his own plans.

He vows to do anything it takes to get revenge on the slavers who murdered his people and took away his home. To destroy their regime, he must infiltrate and dismantle them from the inside, or die trying.

NOPHEK GLOSS is about a boy growing up too fast and being shouldered with trauma and responsibility greater than can reasonably be comprehended, finding a new family along the way but not quite being able to trust that connections forged so rapidly can in fact be genuine and enduring… in space.

I'm about to discuss how much I didn't like the main character so I'd like to stress that the book is so good that it held me despite not liking the main character until close to the end. The world is great, it deals with trauma in a way that is understandable even if it's not always the best decision (since an instinctual reaction to trauma is rarely the best one in the long run, but it is often relatable in the short term).

The third person narration just follows Caiden (except in the epilogue), so every scene is necessarily filled with his voice. I don't like Caiden as a person for the most of the book. He's stubborn, hasty, and doesn't think things through. He thinks far enough to figure out whether the one outcome he desires might maybe happen and then he rushes towards it, only pausing later to figure out whether he might have tried something else. Even once he's talked through what to do with someone, he'll get stressed, scared, or just talk to another person and then change his mind, taking drastic action without talking to anyone about the change. All of this completely makes sense with his background and current circumstances in that way that means if he acted less hastily or more reasonably he would make less sense overall and be poorly-suited for his world. He's a teenager who makes a series of decisions early in the book that make his body and mind more capable without catching up his emotional processing to match. It's a neat narrative trick, as it allows for literally childish decisions to be made in his quest for revenge, driven by guilt and sorrow.

At the end of NOPHEK GLOSS everything I just described and complained about with Caiden changes. He matures in a harrowing and tortuous few weeks which force him to reckon with his past in an awfully visceral way and then to use his relatively new adult cunning to actually try and think more than one move ahead in order to save everyone he loves who can still be saved. It’s an exhilarating sequence which forms the climax of the narrative and a large part of its catharsis. I like this version of Caiden a bit better as a person, but more importantly it’s a better version of him that fits with the emotional arc of the book and shows a kind of maturity, one that’s consistent with his past self. He’s still daring and reckless, but he shows the ability to channel that disregard for his own safety by waiting to be reckless until he can do the most good with his death-defying antics.
character relationships - Caiden bonds into a found family with the crew very quickly, I would say too quickly except that there’s a narrative reason that it might have been sped up while still being a genuine connection. I like his rapport with En the best, they’re supportive of him while pushing him when they think he needs it, and they’re usually right. The crew are various kinds of sapient beings, and unless I missed something I think no more than two of them are human (possibly none of them are). They have interpersonal tangles which predate Caiden’s arrival, pulling him into a tangled but mostly friendly space even though he doesn’t initially get along with everyone. I appreciate how long it takes for him to get close to some of the crew, it helps them feel like their own beings and not just convenient plot devices.

This is definitely soft sci-fi, there are only a few specific concepts and technologies to keep track of with very few technical explanations. There’s a distinct sensibility as to how characters navigate the world, but the actual worldbuilding is shown instead of told. What is explained is how those technologies matter to the beings who use them, and what the stakes are if they are used in destructive ways. Caiden is an engineer, but there are almost no descriptions of what it’s like to fix the ship or do any engineering things. It fits well with the setup of travelling through multiverses, since Passagers really wouldn’t be intimately familiar with histories behind the breadth of technologies and tools potentially available to them.

Almost half of the book is spent trying to navigate healing from major trauma in the first couple of chapters, and then the last quarter is spent using everything that happened to take on a lot more trauma with the goal of stopping even more. Caiden is traumatized, rescued, accelerated, then he escapes to try and fix it all but runs into the power of his enemy and the limitations of his uneasy ally before he gains the opportunity and necessity of enacting a dramatic rescue and last stand against a nearly invincible enemy. Emotionally and interpersonally, the focus is on how what Caiden most needed to heal was time and support, and he was so desperate to shortcut the first that he ended up running away from the second. 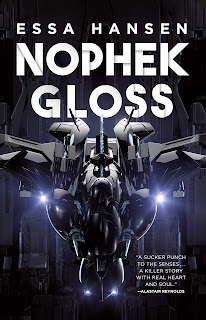