Far from the Light of Heaven by Tade Thompson

The colony ship Ragtime docks in the Lagos system, having traveled light-years from home to bring thousands of sleeping souls to safety among the stars.

Some of the sleepers, however, will never wake – and a profound and sinister mystery unfolds aboard the gigantic vessel as its skeleton crew make decisions that will have repercussions for the entire system – from the scheming politicians of Lagos station to the colony of Nightshade and the poisoned planet of Bloodroot, poised for a civil war.

FAR FROM THE LIGHT OF HEAVEN is a locked-spaceship mass-murder mystery with a disgraced detective and a rookie ship captain.

The ensemble of characters is interesting, I especially like Joké. Her storyline was the most engaging for me, and I like how she comes into her own.

The main thing that frustrated me is that there was literally no way to figure out the answer any earlier than the extended sequence which explains the whole thing in great detail. The actual answer was fascinating enough to loop back around to regaining my interest, but it does mean the middle of the book dragged for me. I like the world that was built, but not really the way that it was conveyed, and I enjoyed the political wrangling. 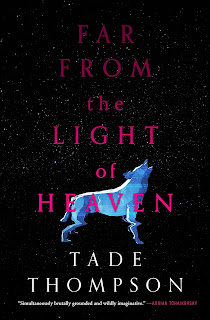