For years, Robin Thorpe has kept her head down, staying among her people in the Riverside neighborhood and hiding the magic that would have her imprisoned by the state. But when Grace Hensley comes knocking on Clan Thorpe’s door, Robin’s days of hiding are at an end. As freed witches flood the streets of Kingston, scrambling to reintegrate with a kingdom that destroyed their lives, Robin begins to plot a course that will ensure a freer, juster Aeland. At the same time, she has to face her long-bottled feelings for the childhood love that vanished into an asylum twenty years ago.

Can Robin find happiness among the rising tides of revolution? Can Kingston survive the blizzards that threaten, the desperate monarchy, and the birth throes of democracy? Find out as the Kingston Cycle comes to an end.

SOULSTAR is the hard work of keeping promises and transforming from survival to thriving. It’s where the characters have to figure out a way to actually solve problems for people imprisoned, displaced, or otherwise affected first by the aether network and then by its removal earlier in the series. It stars a new narrator, Robin Thorpe, who should be recognizable from the earlier books.

Robin’s arc is very different from those of Miles and Grace. Miles’s story is one of running away from power, of refusing to be used. Grace had to figure out what to do with power once she knew what it had cost. Robin is stepping up to accept power, trying to balance between new responsibilities and prior commitments. She’s bonded with her community, paying attention to their needs and trying to get the ruling class to listen. As busy as she is on the page, it conveys the impression that she’s even busier between scenes, every moment full of frenetic drive and concern that unless things materially change for the common people then the small steps won’t be much better than nothing at all.

There’s a major character, Zelind, who appears here for the first time, having been imprisoned in one of the asylums for the last twenty years. I love kher place in the narrative, khe has a sub plot which revolves around kher and becomes very important later in the book. The dynamic between the two of them is understandably strained, as the intervening decades and trauma has shaped them into different people from who they were, and they have to figure out what’s left and what they want now that they’ve been reconnected.

This wraps up a major thing which was left hanging at the end of WITCHMARK, developed but not solved in STORMSONG, and now finally addressed in a really great way in SOULSTAR. There's a few major storylines which begin here and weren't present previously, with a very major thing that's both introduced and resolved here. It is the last book in the series and feels very finished. The world has room for more stories in it, but there's a definite arc that has reached its conclusion, and a minimum of hanging threads. The main thing left is I'd love to see these characters thriving in the background of even more stories, but overall I'm satisfied by what's here. The main character is Robin Thorpe, who was a secondary character in the first two books (moreso in WITCHMARK than STORMSONG), and her narration is very distinct from the other two. One way that I noticed this is as a narrator she refuses to treat whiteness as a default, where the narrators of the other two books didn't comment on race at all. It's a subtle thing that fits the backgrounds and biases of the three narrators in the series and is just one example of the way they prioritize completely different things from each other.

This might make sense if someone started here and didn't know about the rest of the series. The main plot is pretty self-contained since Robin wasn't really involved in how things got to be this way (specifically but not only with regards to the aether crisis), so her perspective would likely help pull a new reader into the story. As always, this is the third book of a trilogy and I do recommend starting with the first book rather than beginning here.

I love SOULSTAR, on its own and as a strong ending to a great trilogy. 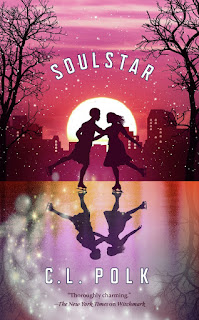