Trail of Lightning by Rebecca Roanhorse (The Sixth World #1)

While most of the world has drowned beneath the sudden rising waters of a climate apocalypse, Dinétah (formerly the Navajo reservation) has been reborn. The gods and heroes of legend walk the land, but so do monsters.

Maggie Hoskie is a Dinétah monster hunter, a supernaturally gifted killer. When a small town needs help finding a missing girl, Maggie is their last—and best—hope. But what Maggie uncovers about the monster is much larger and more terrifying than anything she could imagine.

Maggie reluctantly enlists the aid of Kai Arviso, an unconventional medicine man, and together they travel to the rez to unravel clues from ancient legends, trade favors with tricksters, and battle dark witchcraft in a patchwork world of deteriorating technology.

As Maggie discovers the truth behind the disappearances, she will have to confront her past—if she wants to survive.

Welcome to the Sixth World.

TRAIL OF LIGHTING is a bright light in my reading life, a book with urban fantasy feels but nary a city in sight. Maggie is conflicted and messy, with a supernatural ability to bring death (helped by her gun and very large knife) and not much help reconciling that with the rest of herself.

It's about legacies of trauma and the nature of monstrosity, as Maggie grapples with her understanding of herself. Is she a person who kills monsters? Or a monster who's trying to take other monsters down with her. Part of this is shown early on when she deliberately withholds her expected part of a culturally important greeting, not wanting to show this part of herself to people she is technically in community with. She feels alienated from them by her deeds. Complicating this is the fact that she's useful to them for the very thing that makes them feel uncomfortable around her, i.e. her talent for death which she uses for monster hunting and retribution.

I love the worldbuilding and setting, blending real climate change fears with Indigenous (specifically Diné) mythology to create a new world from the remains of our own. Some things are directly explained, especially if they relate to her personal history or the particular quirks of this particular dystopian existence, but a lot of specific definitions are left to context clues.

I enjoyed this portrayal of Coyote, Maggie's interactions with him are interestingly tense. I like Kai, he seems like a good counterbalance for Maggie. My few complaints about him have excellent in-story justifications which come together in the end and turn them from annoying to appropriately mysteriously and foreshadow-y.

The big reveal is excellent, I'm very pleased by that part of the ending. This was great and I'm excited for the next one! 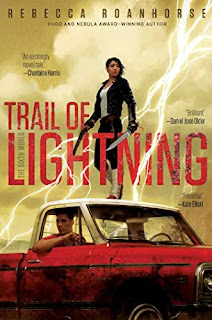