The Last Wish by Andrzej Sapkowski (The Witcher #0.5)

Geralt is a Witcher, a man whose magic powers, enhanced by long training and a mysterious elixir, have made him a brilliant fighter and a merciless assassin. Yet he is no ordinary murderer: his targets are the multifarious monsters and vile fiends that ravage the land and attack the innocent.

THE LAST WISH is a prequel to the Witcher main series, a collection of stories from Geralt’s life before the events of THE BLOOD OF ELVES. Each story is based or at least inspired by a fairy tale or bit of folklore.

I didn’t get much of a sense of Geralt from these stories alone, but having read the first book of the main series his characterization here seemed consistent with that. The titular story, “The Last Wish” had really strong characterization with an early meeting of Yennifer. She’s really well-written here, and that story alone is enough for me to recommend this to anyone interested in the broader series.

As a collection of fairytale retellings, I enjoyed this. It approaches most of them from strange angles which meant they felt great and fresh as stories. My favorite is the one which is clearly inspired by Beauty and the Beast. Given the blend of magic and corrupted desires already present in the series, the fairy tales fit right into the world of the Witcher.

Because this a collection of short stories from Geralt’s life before the main series of books, it doesn’t quite work to analyze the ending or an overall plot. I suspect a re-read might make it clearer, but the framing between stories was confusing to me and it wasn’t until several stories in that I figured out that the start of each chapter strung together to create an narrative distinct from the individual stories.

This is good for anyone looking for additional Witcher content, but I don’t work it works well on its own or as a first introduction to the character and the world. 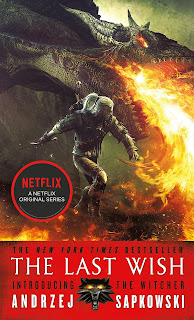