Gyen Jebi isn't a fighter, or a subversive. They just want to paint.

One day they're jobless and desperate; the next, Jebi finds themself recruited by the Ministry of Armor to paint the mystical sigils that animate the occupying government's automaton soldiers.

But when Jebi discovers the depths of the Razanei government's horrifying crimes--and the awful source of the magical pigments they use--they find they can no longer stay out of politics.

What they can do is steal Arazi, the ministry's mighty dragon automaton, and find a way to fight...

PHOENIX EXTRAVAGANT is thoughtful and deliberate, featuring a character who gradually finds themselves as part of a revolution. Not through some showy event, but through a conviction that a particular thing cannot be allowed to stand, that it pains them at their core, and hurts their community now and into the future. It's emotionally complex, leaving room for different people to have different hurts and allegiances in a world where not everyone oppressed is on the side of the oppressed. Also there's a mechanical dragon, which is great.

The worldbuilding is very focused on what Jebi thinks about and specifically what affects them. This means there are a lot of discussions of their interpersonal ties, and what they think about art in the context of occupation and conquest. I like the tight focus, it means that whatever's brought up is detailed, well-constructed, and either emotionally or factually important to the narrative. What Jebi thinks is important enough to explain tells as much about their world as what they slowly realize they'd never thought of before.

The romantic relationship is well-conveyed, fitting naturally into the narrative and then slowly forming a new emotional goal, as Jebi moves from simply trying to have enough money to survive, to having a person they want to live with and for. Arazi fills some of this emotional space, but its ties to Jebi are of a very different (but very important) nature.

I wish there were a sequel in this world (the ending certainly leaves just enough room for it), but it does feel complete enough to be a stopping point. 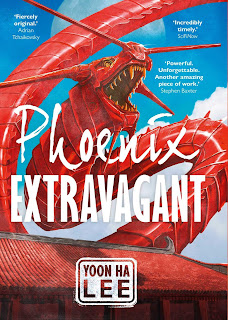