Nancy Luo is shocked when her former best friend, Jamie Ruan, top ranked junior at Sinclair Prep, goes missing, and then is found dead. Nancy is even more shocked when word starts to spread that she and her friends--Krystal, Akil, and Alexander--are the prime suspects, thanks to The Proctor, someone anonymously incriminating them via the school's social media app.

They all used to be Jamie's closest friends, and she knew each of their deepest, darkest secrets. Now, somehow The Proctor knows them, too. The four must uncover the true killer before The Proctor exposes more than they can bear and costs them more than they can afford, like Nancy's full scholarship. Soon, Nancy suspects that her friends may be keeping secrets from her, too.

Katie Zhao's YA debut is an edge-of-your-seat drama set in the pressure-cooker world of academics and image at Sinclair Prep, where the past threatens the future these teens have carefully crafted for themselves. How We Fall Apart is the irresistible, addicting, Asian-American recast of Gossip Girl that we've all been waiting for.

HOW WE FALL APART is a dark academia thriller where four Asian-American high school students have to find their former friend's true killer before their darkest secrets are dragged into the light.

I love Nancy as an unabashed morally grey character. She has things she wants and lines she won’t cross (at least so far), but those lines don’t seem to be dictated by other people’s expectations. It’s the difference between wanting to not be bad and not wanting to get caught. Jamie Ruan, only present in flashbacks, is a fascinating and complex character, shown in a way that makes it easy to understand why Nancy would both hate her so much and have been her friend for so long. I don't feel like I really got to know Krystal and Akil that well in the present, Alexander had much more of a presence, and Jamie's shadow loomed large over the whole thing.

I wish “The Incident” hadn’t spent so long being teased before finally being explained because I prefer feeling like I could guess what’s happening before it’s revealed and this style meant I couldn’t, but the payoff was worth it and I ended up liking the final revelation. Glancing back through the early parts of the book, it had some pretty consistent but subtle foreshadowing as to who was involved, even thought I'm pretty sure it would be tricky to guess why one a first read.

The ending begs for a sequel and it looks like one is planned. As it stands, there’s enough closure to be satisfying, but it teases potential future developments that I hope can play out in another volume.

CW from the author: Please note that this book contains depictions of abuse, self-harm, violence, parental neglect, panic attacks, drug use, mental illness, an inappropriate student/teacher relationship, racism, and suicidal thoughts. I understand these themes may be triggering and would suggest proceeding with caution. 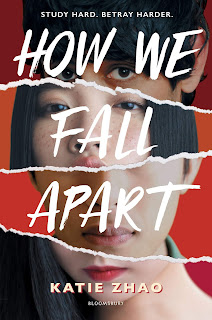