Peter, Wendy, Captain Hook, the lost boys, and Tinker Bell have filled the hearts of children ever since Barrie's play first opened in London in 1904 and became an immediate sensation. Now this funny, haunting modern myth is presented with Bedford's wonderful illustrations, which first appeared in the author's own day, have long been out of print, and have never been equaled.

I live-tweeted my thoughts as I was reading this, you can find that here.

PETER PAN is a witty and fantastic story with great observations about childhood, sexism, and the desire not to grow up but the inevitability of doing so. It's also deeply racist. I read it so you don't have to.

I enjoyed the feeling that there's no inherent division between magical and mundane, that Mrs. Darling walks in her children's thoughts and they were dreaming of Neverland long before ever setting foot on its shores. The way Nana is a nurse (nanny) and a dog, wholly both and frequently subject to the stigma of being a dog. She has days off, dresses the children, and has the respect of her employers, but also gets put in the kennel when Mr. Darling gets upset at her. There's a lot of witty observations about the societal place of women and girls, about the essence of children as joyful but heartless (what I would describe as not yet having a fully developed pre-frontal cortex, i.e. literally not yet able to fully consider consequences and to think of other people as having inner lives or experiencing hurt in the way one knows oneself can).

It has racism so baked into it that even if there were no other issues I could not recommend reading it. There's the explicit assumption that everyone other than the tribe members are British and therefore white, which is unlikely (especially for pirates). The book freely uses "white" to describe anyone not in the tribe generally, and the pirates in particular. The portrayal of Tiger Lily and her tribe was a checklist of racist stereotypes about North American Indigenous people. The most obvious issue is the constant use of a racial slur used to refer to them as a group, but that's not the only thing. The book's gaze clusters the tribe with animals, and refers to them with language that feels designed to treat them as inhuman. There's also the problem that putting Indigenous people on a magical island which has fairies and mermaids it treats the tribe as being equally fictional and fantastical as either of those non-existent creatures, which does harm to living Indigenous people then and now. Tiger Lily's most relevant contribution to the plot is to do something heroic off-page and then need to be rescued from death. On its own that feels related to the sexism which affects characters like Wendy and Mrs. Darling, but I don't think it can be separated from the racist portrayal of her tribe, since it doesn't deem her exploits worthy of being shown at all. At least when Wendy stands aside while the boys and men fight she gets a bunch of description of what she contributes before and after. Tiger Lily just gets rescued and then basically vanishes from the story. While I'm on the subject of sexism, for every really great insight about how sexism affects women and girls in the contemporary society, the narrator says something that just feels sexist and off. Like it does a great job of showing what is going on, but only realizes that half of the problems it portrays are problems at all. And that's before we get to the idea that Hook only has intuition because he has a feminine side, that Smee is portrayed as strange or weak for having a sewing machine, or the way that fatphobia is essential but unexamined in a pivotal plot event.

I'm glad to have read it because I've read so many other version of this story, but I doubt I'll ever read it again and I don't recommend that anyone else try. If you're interested in the story but are hoping for less racism then I recommend perusing my list of retellings I've read, for PETER PAN and otherwise. 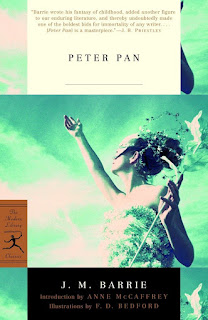