She Who Became the Sun by Shelley Parker-Chan (The Radiant Emperor, #1)

To possess the Mandate of Heaven, the female monk Zhu will do anything.

Mulan meets The Song of Achilles in a bold, queer, and lyrical reimagining of the rise of the founding emperor of the Ming Dynasty from an amazing new voice in literary fantasy.

In a famine-stricken village on a dusty yellow plain, two children are given two fates. A boy, greatness. A girl, nothingness...

In 1345, China lies under harsh Mongol rule. For the starving peasants of the Central Plains, greatness is something found only in stories. When the Zhu family's eighth-born son, Zhu Chongba, is given a fate of greatness, everyone is mystified as to how it will come to pass. The fate of nothingness received by the family's clever and capable second daughter, on the other hand, is only as expected.

When a bandit attack orphans the two children, though, it is Zhu Chongba who succumbs to despair and dies. Desperate to escape her own fated death, the girl uses her brother's identity to enter a monastery as a young male novice. There, propelled by her burning desire to survive, Zhu learns she is capable of doing whatever it takes, no matter how callous, to stay hidden from her fate.

After her sanctuary is destroyed for supporting the rebellion against Mongol rule, Zhu uses takes the chance to claim another future altogether: her brother's abandoned greatness.

SHE WHO BECAME THE SUN is a queer reimagining of the rise of the founding emperor of the Ming Dynasty, featuring a female monk (disguised) whose fate is intertwined with an eunuch who commands an army. It explores destiny, longing, and the weight of expectations which are often inextricable from gender, but also the adaptability of those who side-step that binary by choice, inclination, birth, or trauma. It’s subtle, nuanced, and occasionally blunt in just the right places to make sure the theme is unmistakable.

The characters are vibrant and the politics are intricate without being overwhelming. Part of what keeps that balance is that different characters will think about the same events differently, providing for natural refreshers of what's happened and what's important, but without reusing descriptions. The rotation between Zhu, Ouyang, and (eventually) Ma is occasionally broken by brief sections following secondary or minor characters. Each change in perspective brings something to the scene that a different narrator wouldn't have noticed, or, occasionally, is used to make a revelation more poignant when shown through someone who doesn't initially understand what they're seeing (there's a particular reunion which uses this to great advantage). This has discussions of power, position, sacrifice, and cost, along with who pays what prices for which power. It frequently takes note of which language is being spoken, and how the character feels about switching from one language to another, particularly but not only when Ouyang is narrating. It creates these little moments where the language spoken in the room changes the feeling of the moment and affects how the other characters react. It's a small detail, but one I really like. The approach to depicting the horrors of war is very deft, it tends to focus on the emotional impact of whatever violence or death occurred rather than gory descriptions of the event itself.

I love this and I want more. The ending is satisfying, poised on the eve of the next step for certain events. This definitely feels like phase one of a much larger story, and I'm ready for the next one. 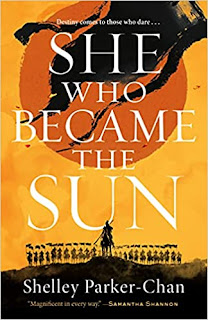