On Wendy Darling's first night in Chicago, a boy called Peter appears at her window. He's dizzying, captivating, beautiful--so she agrees to join him for a night on the town.

Wendy thinks they're heading to a party, but instead they're soon running in the city's underground. She makes friends--a punk girl named Tinkerbelle and the lost boys Peter watches over. And she makes enemies--the terrifying Detective Hook, and maybe Peter himself, as his sinister secrets start coming to light. Can Wendy find the courage to survive this night--and make sure everyone else does, too?

Acclaimed author K. Ancrum has re-envisioned Peter Pan with a central twist that will send all your previous memories of J. M. Barrie's classic permanently off to Neverland.

I live-tweeted my thoughts as I was reading DARLING, you can find that here. My review of PETER PAN by J.M Barrie is here, as well as the link to my live-tweets of that book.

DARLING follows a teenage girl named Wendy, brand new to Chicago, moving back to the city where her mother grew up. On her first night, barely moved in and with the boxes still packed, a strange boy comes in her window and promises her an adventure, or at least a great night out. But the other girl waiting on the ground is his ex, his idea of a good time involves ducking police on the train, and the kids on his "family" have fear in their smiles. Then the detective shows up.

This absorbing thriller retells PETER PAN in a modern setting, paralleling the events of the original but placing it in a new context, wonderfully transforming it. Detective Hook is a great antagonist, getting in the way but not being the true villain of the story this time around. I love Ominotago, she plays a much larger role than the original Tiger Lily got to have, and it was great to find a retelling which gave her a bigger part rather than removing her in an attempt to address the racism in the original (or worse, not addressing it at all). She's very involved without being part of Peter's "family", and she's just a great person. TinkerBelle started out seeming like a life-sized version of the kind of nasty fairy I've known before, but here her standoffishness and distaste for Wendy have an actual reason and add so much to this version. The Lost Boys and Ominotago's friends are pretty cool and there's time to get to know most of them as the night wears on. My favorite new character is Fyodor, no contest. This retelling also figures out what to do with the "Never Bird", from a scene so bizarre that I haven't run into an other adaptation yet which features it.

I love this as a retelling which keeps a bunch of the inherent scariness of the original but draws it out in a way that shows how truly terrifying it always was. You don't need to know other versions of the story in order for this to make sense, but it is unmistakably about Peter and Wendy. Some of the chapter lengths get a little oddly-sized because the events are aligned with chapter divisions in the original book, but the pacing works very well. The tension built gradually at first before getting very scary in the finale. 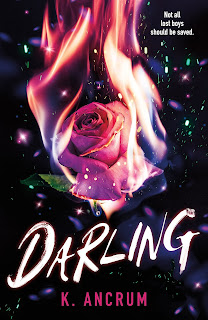