Generations of twin goddesses have long ruled Aeon--until one sister's betrayal split their world in two. A Great Abyss now divides two realms: one cloaked in eternal night, the other scorched beneath an ever-burning sun.

While one sister rules the frozen fortress of Aranth, her twin rules the sand-locked Golden City--each with a daughter by their side. Now those young goddesses must set out on separate, equally dangerous journeys in hopes of healing their broken world. No matter the sacrifice it demands.

THE NEVER TILTING WORLD is a  journey fantasy told by four sides as two separated sisters and their companions travel to the rift at the heart of their world to try and fix their parents' mistakes.

I like the world building, so much is shaped by the central conceit that something went wrong a decade and a half ago and the planet stopped spinning. I would like to know how gravity is still functioning, but other than that it has an internal logic that was pretty easy to follow. I like the magic system, there's enough information for it to make sense but it's not overexplained. I love this premise, and I love how it's carried out. The price of the gifts was a nice touch, the effects begin subtly and then cause a dramatic turn in the plot, making it clear both why anyone ever would have thought accepting them was fine, and how (from my perspective, at least) it's not worth it.

The four main characters all felt very distinct from each other, with different things they wanted, and many differences in what they were willing to give up and what they sought to protect. They had four very different backgrounds and it's shown well. I felt like I had room to like the book without liking all four main characters. I loved one, liked two, and have complex thoughts about the last one. That character undergoes a gradual change in mental state, it’s very well written. It’s marked by certain milestones, specific plot events that cause it to progress. It wasn’t until several of them it happened that I realized the shift they have been building, but when I looked back I could see its early stages. I love stories where a character undergoes a drastic change in how they perceive the world and interact with it, and this did a great job of portraying that shift. I liked how they were written, and my complex feelings come from initially loving them, feeling strange as their personality shifted to be wholly unlikeable, then realizing that it was shifting due to events in the story. At that point I didn't resume liking them as a person, but I love how they're written. I like the pair journeying in the desert the best, their duo was more relatable to me but one of the strengths of this book is that, as I said the main characters are so different that you'll probably like at least one of them, and the narrative doesn't hinge on whether you like all four of them as people.

The ending was good, it does make me want to read part two, and given that this is a duology the second half of the story is waiting in the sequel. It felt a little abrupt, but the characters both literally and emotionally arrived at a place that made sense as the ending before the next book. Sometimes duologies can feel like two intertwined stand-alone books, and sometimes they feel like a larger work split in two. This is very much that second type, I don't know if my impression will change once I read the sequel. 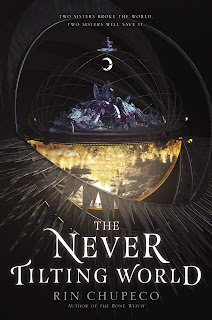