When sisters Muna and Sakti wake up on the peaceful beach of the island of Janda Baik, they can't remember anything, except that they are bound as only sisters can be. They have been cursed by an unknown enchanter, and slowly Sakti starts to fade away. The only hope of saving her is to go to distant Britain, where the Sorceress Royal has established an academy to train women in magic.

If Muna is to save her sister, she must learn to navigate high society, and trick the English magicians into believing she is a magical prodigy. As she's drawn into their intrigues, she must uncover the secrets of her past, and journey into a world with more magic than she had ever dreamed.

Where SORCERER TO THE CROWN dealt specifically with racism and misogyny, THE TRUE QUEEN is more about misogyny and the particular combination of racism and xenophobia that is exoticism. I love the book's overall tone, it has relentlessly upbeat feeling, a kind of optimism borne out of either not understanding how grave the danger might be or from understanding the risks and persevering anyway. Which one is happening shifts throughout the story and from narrator to narrator as characters other than Muna briefly lend their points of view. Even though it was several chapters in before I came across characters I recognized from the first book, this upbeat style was recognizable and immediately make it clear that the books were connected. It didn't retread much ground from the first book in terms of worldbuilding, only re-explaining as much as was immediately necessary, preferring instead to focus on Muna's perspective and the parts of the setting which affected her directly. It's the same way that the worldbuilding was handled the first time around, but seeing the effect centered around a different character made it more noticeable.

As a sequel this was very self-contained. THE TRUE QUEEN is unmistakably part of the same world as SORCERER TO THE CROWN due to the tone, characters, and magic system, but as a story it didn't need the first book at all to be understood. It doesn't really wrap up anything left hanging from the first book, but it does involve characters from there in ways that advance their personal storylines. In particular I appreciate seeing a lot more of Henrietta, and some updates on Zacharias and Prunella. The main storyline follows a new character, Muna, and her story is introduced and resolved here. How this was handled as a sequel makes me think that there's room to cover a lot of kinds of characters who have been marginalized from magical society in this version of England. I also need to see more of Muna, given how the book ends. The main character, Muna, is newly introduced here. Some characters like Prunella briefly reprise their role as narrators, and everyone has distinct narrative voices while keeping an overall tone to the book that works well. Someone could absolutely read this without having read the first book, as relevant information is briefly explained. I had a gap of over a year between reading each book and while there could be more reference I'd catch if I'd read them closer together, that helps me be more sure that someone who enjoys historical fantasy could pick this up at random and have a good time. 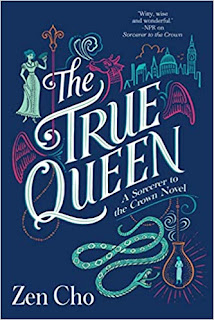