After the fall of Summerland, Jane McKeene hoped her life would get simpler: Get out of town, stay alive, and head west to California to find her mother. But nothing is easy when you’re a girl trained in putting down the restless dead, and a devastating loss on the road has Jane questioning everything she thought she knew about surviving. Caught between mysteries and lies, the undead, and her own inner demons, Jane soon finds herself on a dark path of blood and violence that threatens to consume her.

But she won’t be in it alone.

Katherine Deveraux never expected to be allied with Jane McKeene. But after the hell she has endured, she knows friends are hard to come by. Watching Jane’s back, however, is more than she bargained for, and when they both reach a breaking point, it’s up to Katherine to keep hope alive—even as she begins to fear that there is no happily-ever-after for girls like her.

DEATHLESS DIVIDE is a strong sequel, briefly echoing some of the events of DREAD NATION in a new town before things take a grimly foreseen turn, setting the characters on a new, even bloodier path on their way to California.

The emotional core of the story is the friendship between Katherine and Jane, as this tests how far Jane will go for vengeance and how far Katherine is willing and able to follow her. They began the first book as social rivals and ended it scarred by the same waves of zombies and death, as well as a myriad of more individualized heartaches and wounds. DEATHLESS DIVIDE continues their dangerous trek as they try to keep the other members of their traveling party alive.

This wraps up several things left hanging from the previous book. The main storyline starts here and mostly wasn’t present before, with several big things that are both introduced and resolved within DEATHLESS DIVIDE. This appears to be the end of the duology, and while the world of these stories is grand enough to contain more tales it does feel complete for these particular characters. There was a particular goal expressed early in DREAD NATION which ends up resolved, and that in particular helps this to feel like the end of the story. Jane is a returning narrator and her voice is consistent with the first book. Katherine is a welcome addition as narrator, and her view of herself and of Jane is very different from Jane’s perception of them. They're a fine pair of narrators, seeing each of them through the other one’s eyes is a great way to explore their personalities.

I like a lot of the secondary characters, both the new ones and the returning minor characters who get more of a role this time around. There was a tendency for the book to feel like it picked them up and then just shoved them to the background as they stopped being relevant to some emotional beat in Jane and Katherine's journey. Sue is consistently present, which was nice, and the very dangerous journey meant that the very large cast was necessary as people kept dying and getting replaced by new people to keep safe. Part of that is because the plot isn't about them and it isn't trying to be, but it did make for a strange feeling every time a new person was introduced as I waited to find out whether they were going to get killed or just fade into the background. Lily in particular faded, she was so important as a person to find and keep safe in DREAD NATION and then she just is around but mostly stops being relevant less than halfway through DEATHLESS DIVIDE. I know how she ends up, the story doesn't lose track of her so this isn't a plot hole or something, but it felt odd, and she wasn't the only one this happened to. It might be a reflection of how much Jane and Katherine are surrounded by death and it makes Jane in particular pretty numb to other people's feelings, so anyone that only Jane was keeping track of is prone to fade from the story.

This is a great finish to a solid duology with vibrant main characters and a very memorable setting. I had a great time reading it and I like how it ended, it was open enough to imply possibilities while also addressing the whole reason for their quest for California in the first place. 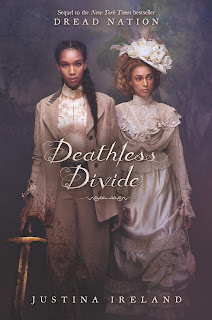