The Echo Wife by Sarah Gailey

Sarah Gailey's The Echo Wife is a non-stop thrill ride of lies, betrayal, and identity, perfect for fans of Big Little Lies and Killing Eve.

Or, to be exact, with Martine, a genetically cloned replica made from Evelyn's own award-winning research.

But that wasn't even the worst part.

When they said all happy families are alike, I don't think this is what they meant...

THE ECHO WIFE gripped me from the first line, using calm and precise language to build a horrific tale of abuse and death. Every revelation drops like a stone into water, raising the level by inches until it feels like it can hold no more.

This is a well-paced thriller which doles out disturbing news just often enough to be unsettling. Evelyn's descriptions consistently bury the lede, pondering first the reactions and consequences to some very important piece of information before finally circling back to say what caused the fuss in the first place. It reshapes the weight of these moments to emphasize how dealing with each horrible (and sometimes not so horrible) event affects those who remain. It's disassociation in book form, as if Evelyn isn't ready to look at what's going on and must approach everything at an angle in order to have any chance of reaching it at all. I especially love the complex discussions about the ethics of cloning, the difference between what Nathan did and what Evelyn does, if there is one.

It's about healing, clawing back by inches what was taken and filling in new things where the old bits are lost forever. Figuring out what bits of Evelyn and Martine belong to themselves, leaving space for them to want different things even though they started out as the same person. It's shaped by the absence of an abuser, the gap left behind by someone who demanded that every thought fit his needs. 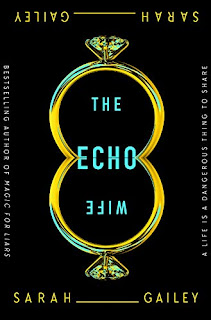