An Unseen Attraction by K.J. Charles (Sins of the Cities, #1)

A slow-burning romance and a chilling mystery bind two singular men in the suspenseful first book of a new Victorian series from K. J. Charles.

Lodging-house keeper Clem Talleyfer prefers a quiet life. He’s happy with his hobbies, his work—and especially with his lodger Rowley Green, who becomes a friend over their long fireside evenings together. If only neat, precise, irresistible Mr. Green were interested in more than friendship...

Rowley just wants to be left alone—at least until he meets Clem, with his odd, charming ways and his glorious eyes. Two quiet men, lodging in the same house, coming to an understanding... it could be perfect. Then the brutally murdered corpse of another lodger is dumped on their doorstep and their peaceful life is shattered.

Now Clem and Rowley find themselves caught up in a mystery, threatened on all sides by violent men, with a deadly London fog closing in on them. If they’re to see their way through, the pair must learn to share their secrets—and their hearts.

AN UNSEEN ATTRACTION is a sexy historical murder mystery with great intimacy, communication, and explanations of taxidermy.

Clem and Rowley's relationship is great to read. They don't have the best communication quite yet, but they're continually trying to understand each other better even before becoming a couple. The sex scenes fit the characters and shifted between developing their relationship and showing how it was deepening outside of those sensual moments. The murder mystery is very engaging and the resolution made sense without being too obvious. The stakes are very clear and the antagonists at interesting, I'm looking forward to seeing how the series moves on given how things turned out. The secondary characters don't get nearly as much time as Clem and Rowley (for obvious reasons) but their personalities come through really well and their various reactions to the very stressful circumstances made sense. 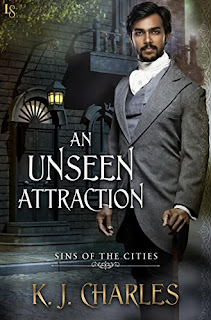