What Big Teeth by Rose Szabo

Exquisitely terrifying, beautiful, and strange, this fierce gothic fantasy will sink its teeth into you and never let go.

Eleanor Zarrin has been estranged from her wild family for years. When she flees boarding school after a horrifying incident, she goes to the only place she thinks is safe: the home she left behind. But when she gets there, she struggles to fit in with her monstrous relatives, who prowl the woods around the family estate and read fortunes in the guts of birds.

Eleanor finds herself desperately trying to hold the family together -- in order to save them all, Eleanor must learn to embrace her family of monsters and tame the darkness inside her.

Rose Szabo's thrilling debut is a dark and thrilling novel about a teen girl who returns home to her strange, wild family after years of estrangement, perfect for fans of Wilder Girls.

I thought at first that this was just going to be a thriller version of a werewolf book. I was wrong, and happy to be so. WHAT BIG TEETH is about a girl returning home after being sent away as a kid, only to find her family stranger than she remembered and wary at her reappearance.

The beginning is a little slow, and at first it felt like the emotional stakes were just going to be how well Eleanor does or does not fit in with her strange and monstrous family. Instead, that family becomes the thing worth fighting for when Eleanor reaches for help to handle her family’s grief and instead finds only smiling terror. The real monsters aren’t what’s strange but rather what’s cruel, and this story rides that line without denying the wolves their teeth, but not hunting them for it.

There’s a lot of catharsis for grief, old and new. When a major character dies early on, everyone who’s left reacts differently to their death, and the story gives space for the different shapes of their grief. I particularly love Arthur’s story. He’s a fascinating character handled very well.

There’s a semi-speaking character, Margaret, who is treated rather poorly. When the other characters are people who turn into wolves, a person who seems to be half-coral, and [SPOILER], having the other person be someone who hardly ever speaks seems to equate this thing that is very real with these other definitely fictional forms of strangeness. I love her as a character, and she’s a crucial and active part of the finale, so I think overall the book understands her as a whole person but the other characters don’t always have that view. After much thought, I don’t see it as a problem for the story, and I’m glad that the overall message is that the years of subtle ableism were bad. These are messy characters who have hurt each other a lot over the years, so Margaret’s treatment is frustrating mostly because it’s thing that really happens, not because it’s worse than anything else.

Since the title invokes the idea of Red Riding Hood (“What big teeth you have”), I pondered whether this is a retelling of that story. My final answer is that it’s definitely not a plot-based retelling, but certain events (a girl traveling to her grandmother, the presence of wolves, people being swallowed) lead me to say that if you love retellings already this can happily be enjoyed in that light, though I think it’s probably inspired by that fairy tale but not strictly attempting to retell it. It does have a closer connection to its probable inspiration than some retellings I’ve read which were explicitly marketed as such, for whatever that’s worth. 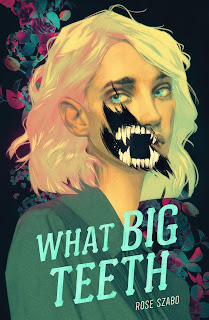