The Death of Jane Lawrence by Caitlin Starling

Jane Shoringfield sees the world in numbers, patterns, and logical projections, and by her math, she needs one thing above all else: a husband who wants a marriage of convenience. At the top of her list is Augustine Lawrence, a young, reclusive doctor. He agrees to her proposal, with only one requirement: she must never visit Lindridge Hall, his ancestral, crumbling house several miles out of town. He is compelled to return there each time the sun sets, despite night calls and ailing patients, but Jane must never accompany him. He says it's just because of disrepair brought on by a country doctor's salary, but on their wedding night, an accident brings her to his door past sundown and she finds him changed. Gone is the bold, courageous surgeon, and in his place is a confused, fearful man.

By morning, Augustine is himself again, but something is deeply wrong at Lindridge Hall. At night, strange figures stalk the halls, and Jane catches glimpses of a beautiful red-eyed woman in the mirrors and windows of the house. Augustine claims she was a patient of his who died two years before, but unexpected house guests tell a different story: her name was Elodie Lawrence, and Augustine believes he killed her.

Soon, Jane is fighting for her sanity and her life, drawn into a world of secret societies, theoretical mathematics, impossible magic, and rituals gone wrong. And now that the secrets of Lindridge Hall have met her, they're not about to let her go.

THE DEATH OF JANE LAWRENCE is slow burn horror of the best kind, built on bridging the gaps between wishes, nightmares, and reality with fevered applications of blood and viscera.

The setting is technically-not-England, which frees it from being beholden to any exact combination of surgical sensibilities with historical accuracy while still conveying a particular feeling by the sum of its details. A surgeon might know the term “ectopic” while still practicing bloodletting and looking down on anyone so backward as to subscribe to miasma theory. Jane is an excellent narrator, highly reliable in how she conveys her thoughts and observations to the reader, but repeatedly stymied as she is less and less able to trust what she learns from other people. I didn’t much like Augustine as a person but he fits his role in the plot very well and is a great character. I love the plot, the pacing is excellent, a great book all around.

Its ending is immensely satisfying, fitting for the characters and in keeping with the horrors which transpire before. If you like surgical horror with magic and madness, don’t miss this one. 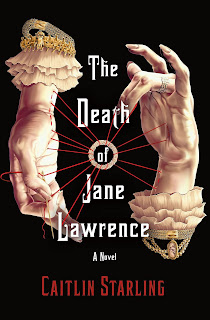