The Jasmine Throne by Tasha Suri (The Burning Kingdoms #1)

One is a vengeful princess seeking to depose her brother from his throne.

The other is a priestess searching for her family.

Together, they will change the fate of an empire.

Imprisoned by her dictator brother, Malini spends her days in isolation in the Hirana: an ancient temple that was once the source of powerful magic – but is now little more than a decaying ruin.

Priya is a maidservant, one of several who make the treacherous journey to the top of the Hirana every night to attend Malini’s chambers. She is happy to be an anonymous drudge, as long as it keeps anyone from guessing the dangerous secret she hides. But when Malini accidentally bears witness to Priya’s true nature, their destinies become irrevocably tangled . . .

I love the worldbuilding, but where THE JASMINE THRONE really shines is in characterization. The various factions are complicated enough to imply tangled motivations and longstanding tensions, but the focus on just a handful of really important characters makes it easier to track. Priya and Malini are the heart of this books, with a few other characters occasionally taking turns in the spotlight as their unique perspectives become relevant. By the time each minor or secondary character gets their chapter they’re already known, so it feels like filling in a missing piece and it makes the whole narrative better.

There was a hugely traumatic event which is a political concern for some characters but a world-shattering transformative event for others. The details of what happened are slowly described throughout the story as they become relevant, sometimes as information someone needs to know and sometimes as catharsis when an affected character talks about what they went through. There’s a lot of grief and pain from that night, bubbling out to shape current events as some want to move on, others want to fix things, and a powerful few want things to keep burning.

A great story and an excellent start to the series, read this for a slow burn sapphic romance with many secrets. 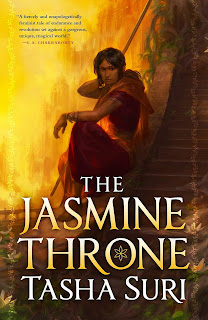