Danny Tozer has a problem: she just inherited the powers of Dreadnought, the world's greatest superhero. Until Dreadnought fell out of the sky and died right in front of her, Danny was trying to keep people from finding out she's transgender. But before he expired, Dreadnought passed his mantle to her, and those secondhand superpowers transformed Danny's body into what she's always thought it should be. Now there's no hiding that she's a girl.

It should be the happiest time of her life, but Danny's first weeks finally living in a body that fits her are more difficult and complicated than she could have imagined. Between her father's dangerous obsession with "curing" her girlhood, her best friend suddenly acting like he's entitled to date her, and her fellow superheroes arguing over her place in their ranks, Danny feels like she's in over her head.

She doesn't have time to adjust. Dreadnought's murderer--a cyborg named Utopia--still haunts the streets of New Port City, threatening destruction. If Danny can't sort through the confusion of coming out, master her powers, and stop Utopia in time, humanity faces extinction.

This does a lot of good things as far as trans rep and I'm going to talk about those before I discuss why I don't recommend it as a whole. It handles issues of dysphoria in a realistic way, as well as showing the way that socially transitioning helped Danny experience gender euphoria once the medical side of transitioning was handled by the superpowers. One of the main plotlines deals with domestic abuse from a parent, with an ebb and flow to the verbal abuse which showed how the general pattern of yelling and silence created an overall situation which was worse than any one incident. She doesn't have everything solved by her body being transformed, which provides a narrative opportunity to show transphobia. When depicting scenes with transphobic slurs and other very cruel language it's often first depicted as a summary of what hearing those words made Danny feel, then later when she's able to unpack it and start dealing with it the reader is told what some of those words were. It helps to center Danny and how she was hurt by misogyny and transphobia before it presents those slurs for the reader.

I like how the world in the book is presented as morally grey, with various factions vying to Danny to join their side. For most of the book it felt like it really was a morally grey world, but I was disappointed that towards the end it seems to pick a specific side. I hope the sequel proves me wrong on that, if I decide to read it. Calamity is a great mentor, she's my favorite character. I also like Doctor Impossible but that got trickier as the story progressed. The worldbuilding works well, sketching the idea of this world that is very different from ours because of when the superheroes showed up, but recognizable enough because of what was chosen to parallel our real developments.

Now for the main reason I don't recommend this: I'm disturbed by the way it handles disability and ableism, both with the casual use of ableist slurs (from characters of all cape factions, so this wasn't just how to mark the villains) and with the treatment of physical disabilities.

This explanatory paragraph contains minor spoilers. There’s a disturbing battle scene where Danny is fighting goons in mech suits, but it turns out they’re embedded in the suits instead of having their organic limbs controlling the suits. One of the goons is someone Danny met earlier and he had all four limbs in that earlier scene, so the implication is that the villain removed his limbs in order to put him in the suit. He also still is on the villain's side while he's in the suit, so I see three possible scenarios: He lost his limbs in some undescribed accident and is being further exploited by the villain he's been helping; His limbs were unwillingly removed by the villain but decided to help them anyway; or He had his limbs were willingly removed by the villain because he believed in the plan so much that he gave up his limbs to get a mech suit. No matter which of the three scenarios is in play, what happens is that the protagonist and supposed hero forcibly removes a quadruple amputee from his mech suit (which is also an assistive device), causing great pain to him, the hero notices that it causes great pain, and then proceeds to do the same thing to the other four amputees in mech suits, narrating each time how much it hurts them to be ripped out of the suits. I'm, frankly, uninterested in trying to hash out exactly what I wish Danny had done differently (though leaving the goon on a roof after removing his assistive device is definitely NOT something I think she should have done), I'm more concerned with how callously this treats multiple disabled characters, both named and unnamed, and how the reveal that this previously-limbed character now has fewer limbs is treated as shocking and horrific. The villain is a cyborg, and exactly which parts of her body are organic or inorganic are described in a way that feels like it's supposed to be disturbing. Finally, there's a friendly character who also loses a limb and expresses feeling like there's nothing to live for now, which, while certainly something a real person in that scenario might express, seems narratively bad in the context of the earlier ableism.

Overall this seems like pretty good handling of trans stuff and domestic abuse by a parent, but mediocre to terrible handling of ableism and disability, and therefore I don't recommend it. Maybe the sequel could win me back, but that won't be enough to make me feel good about this particular book. 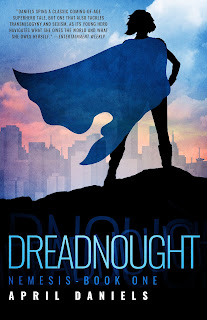