Witches are not by nature gregarious, and they certainly don't have leaders. Granny Weatherwax was the most highly-regarded of the leaders they didn't have. But even she found that meddling in royal politics was a lot more difficult than certain playwrights would have you believe...

WYRD SISTERS became enjoyable about halfway through, which was either when the Shakespeare references really got going or is just when I realized they were happening at all. I got enough of them for it to be funny, but it also means that a lot of the humor is referential, depending on the reader to be familiar with a bunch of other stuff (or in this case, with several specific plays) in order to get the jokes. Discworld humor tends to he referential but this felt like a particularly egregious version since so much of it has one source rather than generally pulling from many disparate inspirations.

There was a disconcerting amount of humor which revolved around men being in dresses in a theatrical setting. It was particularly frustrating when someone of it was from a Dwarf, who (at least later on in the series) have an approach to gender which I’ve been promised I’ll like, but clearly had some issues to work out in this one. The “joke” began and ended with “that man is in a dress”, which is 1) not actually a joke and 2) potentially transphobic.

The Fool is my favorite character, his backstory is very moving and his romance is genuinely sweet. Overall this one is fine but not amazing. 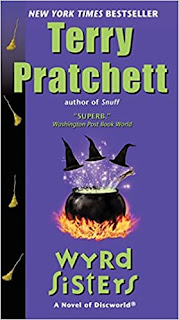