On a cold spring night in 1952, a huge meteorite fell to earth and obliterated much of the east coast of the United States, including Washington D.C. The ensuing climate cataclysm will soon render the earth inhospitable for humanity, as the last such meteorite did for the dinosaurs. This looming threat calls for a radically accelerated effort to colonize space, and requires a much larger share of humanity to take part in the process.

Elma York’s experience as a WASP pilot and mathematician earns her a place in the International Aerospace Coalition’s attempts to put man on the moon, as a calculator. But with so many skilled and experienced women pilots and scientists involved with the program, it doesn’t take long before Elma begins to wonder why they can’t go into space, too.

Elma’s drive to become the first Lady Astronaut is so strong that even the most dearly held conventions of society may not stand a chance against her.

The setting is an alternate-history version of the 1950’s and 1960’s after a meteorite strikes and wipes out most of the USA’s East Coast. While it’s undoubtedly science fiction, it’s not my preferred kind. It has really nuanced portrayals of issues like sexism and anxiety, but ultimately those are too real for me right now, mostly because of the historical setting.

Not my thing but seems well done, try this if you want an alternate history portrayal of women fighting sexist inertia to be in flight after a catastrophe turns the world’s attention to escaping off-planet. 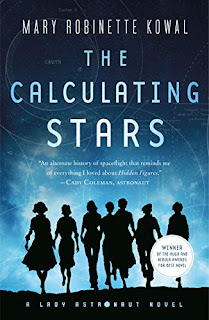