Crescent Moons is a fun and schlocky detective story with a superhero twist and a lot of great wordplay. It has a generally light vibe after a shockingly tragic start.

The banter just feels good to read for much of the book. The minor characters have distinct rapports with the MC and the conversations convey a lot about everyone in a pretty short amount of time. There's some infodumping but not a ton, it's spread out and usually prompted by something relevant happening so it fits in pretty naturally with the dialogue and action. I like the premise and most of how it turned out, watching to see the MC try and disentangle himself from the slowly more and more convoluted mess was very enjoyable.

There's a brief sex scene about halfway through that feels pretty awkward but also fits the MC. It's described more like what sex is, physically, rather than how it feels emotionally, but the narration around the scene itself establishes a playful and intimate dynamic between the characters. It's very consistent with the MCs characterization in the rest of the book, and I got to know one of the minor characters a lot better through the events surrounding the scene.

The narrative style captures the schlocky detective vibe really well, and for most of the book it feels really fun. My big caveat is that there's a pretty steady stream of low-key sexism that seemed like it was going to be examined or deconstructed, but that never quite happened. It's possible that the main character is going to learn some tough lessons in the next book, but I don't know if there's quite enough in this first one to really foreshadow that, if it's coming at all.

TLDR: It feels like a noir detective novel with a modern (and very welcome) flair. It fits solidly in that genre, but I wish this update had completely ditched the sexism while it was adding the superheroes. 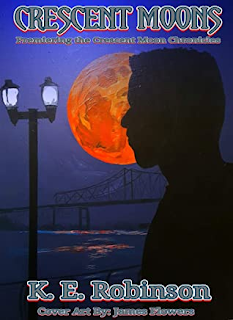 Tales of Mundane Magic: Volume One by Shaina Krevat