Into the Drowning Deep by Mira Grant, aka Seanan McGuire

Into the Drowning Deep is a bloody brilliant horror novel that cares deeply about every character it kills. Fantastically paced, with a scientific approach to monsters. It illustrates in gory detail how hubris and ableism can make a nightmare scenario even worse.

The way dread and horror slowly is built, even before many of the characters have a concrete reason to worry, is fantastic. Many of the early chapters end with just a few plot-specific lines which indicate that something small has gone wrong in a way that many characters don't know yet. Since the reader also doesn't know yet why it's a problem, the way its included builds a non-specific anxiety that fits the book's main genre (horror) perfectly.

The balance between primary and secondary characters is well managed for a book with such a potentially large cast, as most of it takes place on a ship with over a hundred scientists and researchers but narrows the story's focus to a few very memorable people. Then, once the slaughter kicks off, it retains its attention on the characters. Some of them die because they make poor decisions but they're decisions which completely fit their personalities, and by that point we know them well enough to understand how they were doomed.

Be aware that this book has zero aftercare, there's almost nothing between the final resolution of the danger and the end of the book. Given this book's well-deserved place as a horror novel I don't see this as a problem. I don't know what any surviving characters could have said after all that horror and death that wouldn't feel trite, so it definitely works for the book (and I'll seek my aftercare in reading something a bit happier next).

As much as I love this author's writing I think I'll stick to her works under Seanan McGuire rather than Mira Grant after this, horror just isn't my genre, I think I prefer creature features. However, given that I found myself reading it, this was fantastic and I definitely recommend it to anyone who likes horror. 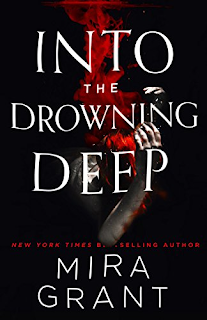