For Malik, the Solstasia festival is a chance to escape his war-stricken home and start a new life with his sisters in the prosperous desert city of Ziran. But when a vengeful spirit abducts his younger sister, Nadia, as payment to enter the city, Malik strikes a fatal deal--kill Karina, Crown Princess of Ziran, for Nadia's freedom.

But Karina has deadly aspirations of her own. Her mother, the Sultana, has been assassinated; her court threatens mutiny; and Solstasia looms like a knife over her neck. Grief-stricken, Karina decides to resurrect her mother through ancient magic . . . requiring the beating heart of a king. And she knows just how to obtain one: by offering her hand in marriage to the victor of the Solstasia competition.

When Malik rigs his way into the contest, they are set on a heart-pounding course to destroy each other. But as attraction flares between them and ancient evils stir, will they be able to see their tasks to the death?

A fast-paced and engaging fantasy, A Song of Wraiths and Ruin is good from the first page to the last. High stakes oaths, fantastic characters with mutually incompatible goals, and the creeping dread of never quite being enough for what everyone expects of you.

This book flew by for me, I sat down to read just a bit to check it out and then devoured it just a couple of days. It does an amazing job of establishing two compelling protagonists with incompatible goals and making you want them both to succeed. The world is rich with backstory and detail without ever feeling overwhelming, and it so perfectly handled the delicate balance of providing a satisfying ending while making me invested in the sequel. I love everything it did and I really want to know what happens next.

When I say they have incompatible goals, I mean that they literally can't both succeed (given the setup of the book) and I want so badly for them to both get what they want. Every time it switched perspectives I was fully into their mind and rooting for them, then rooting just as hard for the other protagonist when it switched back. Having made it to the end, I think I finally picked one I prefer, but it took until the final pages for me to decide (and I suspect the sequel will shake it up all over again). Part of what makes the worldbuilding so good is that it uses the characters' very different backgrounds to highlight different bits of history and the setting, using their different perspectives to talk about overlapping topics in distinct ways over the course of the book.

There are nuanced portrayals of panic and fear (including at least one panic attack) in a way that conveys what the characters are going through without just resorting to ideation. It conveys how terror feels while still leaving enough space and care to generally avoid passing that fear along. Instances of fear are often paired with one or more characters demonstrating ways that they try to cope, most of them were recognizable to me as real ways to deal with panic attacks. I love how much care went into this, especially in a YA novel. It's not a panic attack tutorial, it's a realistic portrayal of how a fictional character deals with a real-world problem, as well as being an opportunity to learn more about the character. It's a great scene in its own right, but it had the added weight of making me feel seen in a small but very welcome way.

The world building is great, the characters are great. I'm definitely looking forward to the sequel, I need to know how the larger story ends. 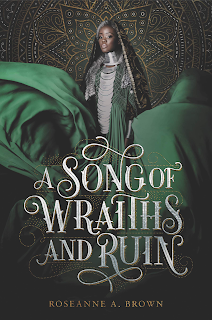