In this epic saga of magic and kungfu, four siblings battle rival clans for honor and power in an Asia-inspired fantasy metropolis.

Jade is the lifeblood of the island of Kekon. It has been mined, traded, stolen, and killed for -- and for centuries, honorable Green Bone warriors like the Kaul family have used it to enhance their magical abilities and defend the island from foreign invasion.

Now, the war is over and a new generation of Kauls vies for control of Kekon's bustling capital city. They care about nothing but protecting their own, cornering the jade market, and defending the districts under their protection. Ancient tradition has little place in this rapidly changing nation.

When a powerful new drug emerges that lets anyone -- even foreigners -- wield jade, the simmering tension between the Kauls and the rival Ayt family erupts into open violence. The outcome of this clan war will determine the fate of all Green Bones -- from their grandest patriarch to the lowliest motorcycle runner on the streets -- and of Kekon itself.

Jade City is the first novel in an epic trilogy about family, honor, and those who live and die by the ancient laws of blood and jade.

Fascinating and ruthless, Jade City is a slow-burning, deftly-politicking fantasy which brings you 'round to meet new friends, then coyly remarks that none of them are safe; the best you can hope for is that when your darling dies you'll bury them with their Jade.

I love this book, I love the characters, the setting is great... If you've read very many of my reviews you probably know I love interpersonal politics and heists... and this has all of that, all the time. Lots of discussions, weighing of actions, politicking, and then blades. There's betrayal and subterfuge, a few heists, some capers and a very high body count. Seriously, like, a lot of people die by the end of this (and I suspect even more will die in the sequel, Jade War). For me the two biggest strengths in this book are the world-building and characterization. There are a lot of named characters, but the book is very good at directing attention to minimize the number of names the reader really needs to retain, while still realistically portraying large networks run by a few powerful families. I thought I knew who my favorite character was, but then someone else started giving them a run for their money in my affections and I look forward to seeing how they get on in the sequel.

Sometimes stories introduce their readers to a new (to them) setting by including a character who is also new. Others just drop you in and expect you to keep up. This book had a wonderful blend of both, not by having a character who was wholly new to the setting, but one who was returning after an absence spent in a setting implied to be very much like the real modern world. It also included some who were continually present, but marginalized in different ways from each other. The combination of them meant that different people were naturally able to comment on or explain different parts of the setting and give different views on the principal players involved, without it ever feeling like an infodump. It took me a little bit to get into it because there was a lot of world to build, but once it got going I couldn't read anything else until I was done.

One of the very clever things this book did to center the reader fully in the world was to repurpose various phrases in English which normally have different (sometimes negative) meanings, by recontextualizing them in a fictional country which is organized around this highly prized and quasi-magical substance, Jade. Phrases related to being green are turned from being an indication of new-ness or weakness into expressions indicating strength, prowess, and power. To be "cut" has a new, Jade-specific and differently positive meaning, etc. Early on it made me pause to reconfigure my expectations of these words, but because the context was clear and these new meanings were unmistakable it hastened a kind of immersion into this new world, and that new world is fantastic. 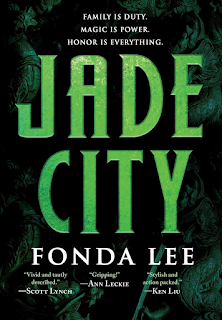