A Spell for Chameleon by Piers Anthony (Xanth, #1)

A Spell for Chameleon attempts to be a fantasy about appearances, assumptions, history, and the importance of treating people fairly. Unfortunately it is so agonizingly sexist that it can barely go ten pages without insulting women or upholding toxic masculinity.

I used to love this series, and I’d read up as far as A Swell Foop before stopping. But now that I’m mostly out of the toxic, sexist miasma of my childhood and teen years, the problems in this book are apparent from the first page. Bink has everything (telling us he’s smart, good looking, amazing in every way), except for a finger he lost in a childhood incident made worse by internalized toxic masculinity and fear making him hide the damage until it was too late to be fixed by magic, and his apparent lack of magic in a world which demands that one’s magical talent appear by age 25. The world built here is fascinating, which is a large part of why I read so many of these books as a teenager. But it’s conveyed in long infodumps and meandering internal monologues. There’s a genuinely intriguing story here, and if it had been about someone learning to be less sexist, unlearning internalized toxic behaviors, then it could be great. But it’s someone who’s canonically amazing except for one thing (apparent lack of magic) who’s trying to get that one last thing to go right.

There’s a very uncomfortable fixation with sex, including sexual assault. There are ways to handle this topic well, and not every way this book tries is bad, but it’s constant and occasionally treated like a plot twist. There’s a point early on where the crime of rape is described as being almost a serious as being a human without magic, which is a terrible way to convey the seriousness of both situations. It’s also obsessed with intelligence, especially as an indication of merit. In order to have a narrative which tackles a topic, like sexism, it helps a great deal to have at least one character who isn’t modeling that problematic behavior. That’s not the only thing you need, but it’s a pretty important first step. In this book, some of the female characters are differently sexist than the male ones, but they’re all participating in misogyny and rape culture in a way that expects men to behave badly and for women to exist primarily as sex objects. It has little things that show they’re uncomfortable with being discussed as objects of desire, but it’s repeatedly framed as then shying away from raw manliness, rather than the (in my opinion, much more likely) possibility that they don’t like feeling as though only men restraining their “natural impulses” keeps them safe from assault or worse.

There are some genuinely funny moments and clearly a lot of thought went into how Xanth works, its history and its denizens. The writing is good throughout and the plot is handled really well, for the most part. If it didn’t have casual and sometimes not-so-casual misogyny every other page this would be a great book, and I get why someone might like it anyway (I used to, myself). It has some interesting ideas about perception and appearances and how the official story might not be the real story. I liked the second half much better than the first, since a lot of the sexist world building was out of the way and I could relax into the story a little. But then, every couple if pages there would be an event or a comment that pulled me back out, making me remember how sexist this book is. And, the frustrating thing is, it had the potential to be an examination of those toxic ideas, but instead it features people mutually reinforcing different kinds of sexism, occasionally objecting to the way another person performs their sexist attitudes, but never questioning their rightness. There’s a bit where a male character expresses a pretty sexist idea and a female character snaps at him, “You’re not a woman”, thus implying that the author at least knows what female objections to sexism can look like, which is part of why it’s so frustrating that the book sets up the reader to much more easily identify with the mostly calm and more often reasonable male characters. In that scene, she objects, then the characters just move on to the next scene like nothing happened. It sets it up like it’s just natural for everything to be this way, but the author is the one who set this up, who recreated sexism from the real world and added in a few unique dynamics only possible in a fantasy setting. Every time I thought, for a minute, that maybe the book would teach a lesson to the sexist characters, it would disappoint me by reaffirming their troubling behavior. So-called “manly” behavior is consistently equated with sexist behavior. The author had the ability to write anything here, Xanth is a really cool magical land (especially early on before the mythos became self-contradicting), and he interwove it with sexist garbage. 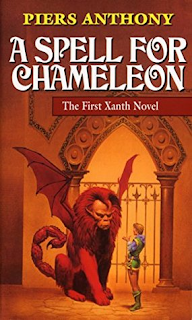