There is a dark secret that is hiding at the heart of New York City and diminishing the city’s magicians’ power in this fantasy thriller by acclaimed author Kat Howard.

In New York City, magic controls everything. But the power of magic is fading. No one knows what is happening, except for Sydney—a new, rare magician with incredible power that has been unmatched in decades, and she may be the only person who is able to stop the darkness that is weakening the magic. But Sydney doesn’t want to help the system, she wants to destroy it.

Sydney comes from the House of Shadows, which controls the magic with the help of sacrifices from magicians.

I stopped reading because I’m concerned that this book where a secret and powerful group of magic users whose power is propped up by a secret location where children (and some adults) are tortured and killed in New York City might be antisemitic. It’s at least playing way more into blood libel than I’m comfortable reading.

I hated almost every character. Sydney and her employer are the most sympathetic characters among the magicians, and it seemed like most of the other magicians were meant to be somehow repulsive. Sydney are her employer are also the only magic users who are in the competition but not part of the established houses. At least as far as I got in the book, the members of the houses are varying degrees of unpleasant, from just generally complicit in the pain caused by their magic, all the way up to one being a serial killer who thinks his method of direct murder is better than the secret torture dungeon. I don’t know if he’s right or wrong, but I’m uninterested in the debate. 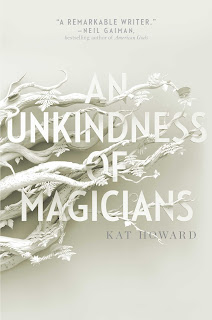