The Darkness Outside Us by Eliot Schrefer

Ambrose wakes up on the Coordinated Endeavor with no memory of a launch. There’s more that doesn’t add up: evidence indicates strangers have been on board, the ship’s operating system is voiced by his mother, and his handsome, brooding shipmate has barricaded himself away. But nothing will stop Ambrose from making his mission succeed—not when he’s rescuing his own sister.

In order to survive the ship’s secrets, Ambrose and Kodiak will need to work together and learn to trust each other . . . especially once they discover what they are truly up against. Love might be the only way to survive.

THE DARKNESS OUTSIDE US features two older teens on a space mission to rescue Ambrose's sister. When little things stop adding up, the more Ambrose and Kodiak try to find out what's happening, the more the A.I. gets in their way.

The plot takes a while to get going, the beginning is a lot of worldbuilding which is usually smoothly conveyed, but occasionally veers into thinly veiled infodumps. Once things get going (somewhere between a third and halfway in) they pick up quickly and the story becomes very engaging. It has much of what I love most about time loop stories without technically being one. I was initially hesitant about the relationship between Ambrose and Kodiak, their chemistry grew slowly and I'm a bit too demi to buy into a romance driven by being the only two people they can interact with, but once I accepted that they clearly like each other I was able to settle in and enjoy the story.

They're from two different countries (apparently the only two countries on Earth at the time of their ship's launch), which are implied to be Russia and an Anglophone country (I'm pretty sure this is supported by the actual text, the audiobook narrator used a Russian accent for Kodiak and a British one for Ambrose which may have affected how I interpreted the story. They make reference to a cold war, so I'm pretty sure that's what was happening. This felt a bit off to me from a worldbuilding angle because there are other large countries who could just as easily have been used as the starting point for the two remaining world powers, but I think the choice ends up working. With that small caveat, I love the second half of the book, I had an excellent time and didn't want it to end.

I would highly recommend this, except for my uneasiness about the country choices and the fact that in the first quarter I almost didn't finish it because of the slow pacing and how I wasn't getting into the romance at first. If you want a groundhog day story about gay love in space, with a possibly hostile A.I., try this. 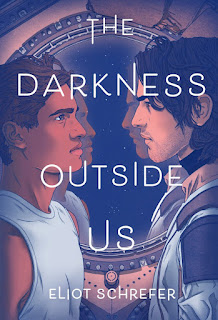