The Power of the Dog by Thomas Savage

Set in the wide-open spaces of the American West, The Power of the Dog is a stunning story of domestic tyranny, brutal masculinity, and thrilling defiance from one of the most powerful and distinctive voices in American literature. The novel tells the story of two brothers — one magnetic but cruel, the other gentle and quiet — and of the mother and son whose arrival on the brothers’ ranch shatters an already tenuous peace. From the novel’s startling first paragraph to its very last word, Thomas Savage’s voice — and the intense passion of his characters — holds readers in thrall.

“But his habits and appearance required strangers to alter their conception of an aristocrat to one who could afford to be himself.”

THE POWER OF THE DOG is about manhood and homophobia in the last gasps of the Old West, following a rich cattle rancher and his brother as one starts to have a life outside of their duo and the other tries to make him miserable enough to stay.

If you liked the 2021 film of the same name, adapted from this text, then you’ll probably like the book. The main changes are consolidations; placing some events as backstory instead of showing them as the book does, collapsing two side events into one, and to move Phil’s bigotry into fewer targets. The rest of this review contains minor spoilers, as it’s impossible to discuss what makes this so good without talking about some of what happens in it.

Phil is an odious person, a homophobic man who has based his hygiene and personal habits around as many opposites to his idea of a gay man in his era (clean, well-dressed, quiet, liking womanly things) that he possibly can. The end result is someone who bathes once a month (not at all in the winter), refuses to wear gloves (not even when castrating cattle and doing all the other bloody, messy work required to drive cattle and run a ranch), and uses his exceptionally sharp mind to whittle down the confidence of anyone who catches his ire (usually in language dripping with bigotry of whatever kind will sting the most). His closest relationship is with his brother George, a closeness which assumes George would never request distance and leaves Phil frustrated when George falls in love and marries a widow. He’s also enamored with his long-dead mentor in all things cowboy; Bronco Henry, talking up his wisdom and exploits to the ranch hands even two decades on from Bronco Henry’s death.

George meets and marries Rose, a widow whose husband killed himself early on in the book, years before the main story. Their son is strange, eventually assumed by Phil to be gay, called a sissy for his arrangements of paper flowers and way of dressing and walking. The boy’s quiet study of medical texts and dissections of animals hum along in the background, eventually he attends medical school with the help of his late father’s books. His actual sexuality is secondary to Phil’s perception of it, seeing the boy as weakness walking, the embodiment of everything Phil despises even as he eventually longs for connection again.

Phil’s homophobia is one of a pile of bigotries which he wields like barbs when he’s irritated or inconvenienced. He most common method of addressing his brother is “Fatso”, and when Rose starts drinking in an attempt to stomach living in the same house as him, he belittles her for it, taking it as proof that she’s just taking advantage of his brother. His every action drips condemnation, that if someone has chosen to do what Phil would not, then they must be weak or scheming and their choice is contemptible.

The audiobook narrator’s calm tone is perfect for this dryly delivered story which builds slowly, layers of time pooling to form the whole. The ending is quiet, managing to tie together everything in a single calm moment. It’s a resolution that feels like life, where one phase can unquestionably be over even as everything else continues on. 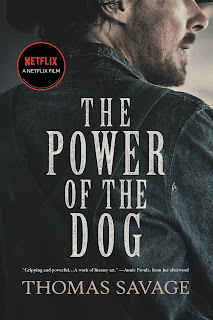