The Stardust Thief by Chelsea Abdullah (The Sandsea Trilogy #1)

Loulie al-Nazari is the Midnight Merchant: a criminal who, with the help of her jinn bodyguard, hunts and sells illegal magic. When she saves the life of a cowardly prince, she draws the attention of his powerful father, the sultan, who blackmails her into finding an ancient lamp that has the power to revive the barren land—at the cost of sacrificing all jinn.

With no choice but to obey or be executed, Loulie journeys with the sultan's oldest son to find the artifact. Aided by her bodyguard, who has secrets of his own, they must survive ghoul attacks, outwit a vengeful jinn queen, and confront a malicious killer from Loulie's past. And, in a world where story is reality and illusion is truth, Loulie will discover that everything—her enemy, her magic, even her own past—is not what it seems, and she must decide who she will become in this new reality.

Given that this is pulling from the Tales of a Thousand and One Nights, I like how this blends between having those stories be events that already happened, things happening now, and stories the characters are telling. I generally dislike stories where characters spend a lot of time lying to each other, especially when coupled with disguises, so I wasn't sure if I'd like this one. Unfortunately I was right and I'm not enjoying it, so I'm stopping. 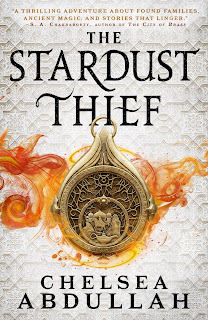