When magic returned to the world, it could have saved humanity, but greed and thirst for power caused mankind's downfall instead. Now once-human monsters called Howls prowl abandoned streets, their hunger guided by corrupt necromancers and the all-powerful Kin. Only Hunters have the power to fight back in the unending war, using the same magic that ended civilization in the first place.

But they are losing. Tenn is a Hunter, resigned to fight even though hope is nearly lost. When he is singled out by a seductive Kin named Tomás and the enigmatic Hunter Jarrett, Tenn realizes he's become a pawn in a bigger game. One that could turn the tides of war. But if his mutinous magic and wayward heart get in the way, his power might not be used in favor of mankind. If Tenn fails to play his part, it could cost him his friends, his life…and the entire world.

RUNEBINDER is a struggle for survival in post-apocalyptic Chicago, full of blood, death, magic, temptation, and queer longing for safety that seems impossible.

I like Tenn as a main character, he has a blend of hope and exhaustion which makes him really believable as a kid who's been fighting this magic war for several years by this point. Most of the main characters would feel overpowered for book one, but here they fit, as the enemies they fight are either so numerous or so individually powerful that only the twins' three-sphere competence and Tenn's mysteriously strong Water connection are able to withstand them. I like the twins, there's a blend between moments where they're treated as a unit and when they're treated as individuals. They're more experienced than Tenn, but he's differently powerful, so they play complementary roles in confrontations and battle scenes. The cadence of where their abilities were enough and where they were overwhelmed felt natural and worked with the plot to turn this incredibly bloody story into something that's soothing on a narrative level.

The worldbuilding is a Rapture-as-zombies take on events from some parts of  Revelation in the Bible. If that sentence didn't mean anything to you that's fine, the worldbuilding is internally consistent even without being understood as a (thus far) secular reimagining of a Biblical apocalypse story. There are spirits, magic, and powers, but only the (briefly present and utterly irrelevant) homophobic street preachers tie the destruction of the world to any particular deity.

There's a group of characters which seem like "what if the Roma (or another similar group) were magic". They're not named as being a particular real-world group, but they're an insular community who live in a magically-hidden trailer park in the woods, wear patchwork clothes, and play a "magic guide" role in the story. I don't have the background to state unequivocally that this particular characterization is offensive, but it fits neatly into the literary history of using the tropes associated with this real-world group and stripping them of their identity labels in order to fit the story while reinforcing existing stereotypes, usually negative ones. They're portrayed as having access to magic that the rest of the world doesn't, and they have an answer for why they didn't do more when things got bad, but Tenn gets frustrated by what feels like holding back information and resources that could have saved lives. It feels more egregious when the setting is real-world Chicago after a magical event, if I'm right about who they're meant to be then they could have been called Roma and the only disruption would be that it makes the possibly harmful characterization more obvious. If the story doesn't mean to imply they're Roma, then it shouldn't make them live in mobile dwellings and wear patchwork clothes while playing the role of magical/prophetic consultants.

I had fun reading this, it flowed well as an audiobook and I enjoyed the narrator. Unfortunately the issue with the not-technically-Roma and a few other minor things dampened my enjoyment somewhat, though I do plan to try to sequel. 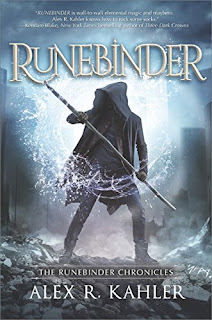