Ahn is no one, with no past and no family.

Altan is a lost heir, his future stolen away as a child.

When they meet, Altan sees in Ahn a path to reclaiming the throne. Ahn sees a way to finally unlock her past and understand her lethal magical abilities.

But they may have to pay a far deadlier price than either could have imagined.

JADE FIRE GOLD stars Ahn, a peasant girl who finds out that her past is more complicated than she remembers, and Altan, in hiding and making a play for his lost throne.

I loved the first part of the book and then felt like the second half was just okay. It had a tendency to cut away after emotionally intense moments. There felt like too many scenes of watching someone open a door (literally or metaphorically), gasping at what they found inside, then immediately switching to the other character's perspective in a different location and a different emotional beat. A few of these switches were when Ahn and Altan were in the same scenes together. I liked some of those moments where one of them says something and then the perspective switches for the other person's reaction, but it started to feel like a movie with too much cross-cutting. It's a fine technique, but it shouldn't be the only way to edit the scene.

The characters' backstories are conveyed through worries, nightmares, and thoughts about how the present day is shadowed by the past. Because of the empire's use of physical mutilations as punishment followed by shunning, there are complicated layers of ableism established early on which then don't really go anywhere. The audiobook narrators work well as a pair, their performances fit the characters.

I like how there are several queer secondary characters, but it started to feel a bit like both protagonists got their own gay best friend. That thought might just be my irritation in the book as a whole coming out in something pithy, but it’s a thought I couldn’t shake once I had it. At times it feels more like they're queer so that they won't distract from the romance with the main pair, which was so flimsy that even the possibility they could like someone else would be enough to shred it. It felt like Ahn and Altan spent so long dancing around the idea of a relationship that by the time they actually maybe acknowledge their feelings I’d formed the opinion that they wouldn’t be good together. It’s just enough romantic vibes to keep it from being a platonic guy/girl teamup, but not enough romance to matter to the plot. It’s an awkward middle ground which might be setting up something for the clearly intended sequel, but as of this review in 2022 it doesn’t look like that’ll happen. 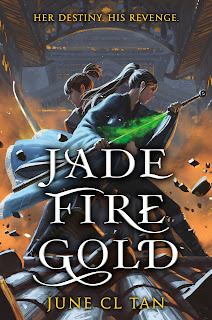