Identical twins Barry and Harry Krasner are house-sitting at their great-uncle's Midwest farm. It's peaceful at first, but soon they realize there's something about the farmhouse that makes locals stay far away. The twins are sure that the locked shed out back is their reason why - but what they find there is more shocking than anything they could have imagined.

“Think about what it means to go through. Once you start, there’s no changing your mind and turning back… You’d be totally alone… Think how lonely and awful that would be. You’d… kind of be a singularity yourself.”

Harry and Barry are twins, temporarily staying at their recently-deceased great-uncle's farm when they discover something strange about the backyard shed.

Harry is content being a twin, he's more bothered by how vocally Barry seems to hate being his twin. This tension drives a very drastic choice Harry makes late in the book. Their relationship revolves around meager attempts at bonding followed by bullying in various forms. There's a neighbor girl who exists mostly as an outsider to verify that what they think is happening has actually happened. She serves to shift the balance of power between them (usually in Barry's favor) rather than having an endless back-and-forth of the kind it seems they had at home.

The worldbuilding is well done, a bunch of little things early on end up having a pretty cool answer, fitting together in a great way. I like the plot, but the ending has an ambiguity which makes it hard to know whether it's supposed to be read triumphantly or as horror. I come down more on the side of horror, but I definitely didn't pick up on that when I first read it as a teenager. 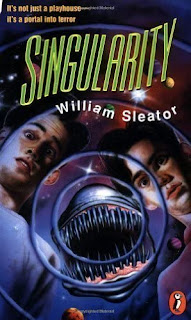