Wild and Wicked Things by Francesca May

In the aftermath of the First World War, a young woman gets swept into a glittering world filled with illicit magic, romance, blood debts and murder in this lush and decadent debut novel.

On Crow Island, people whispered, real magic lurked just below the surface. But Annie Mason never expected her enigmatic new neighbour to be a witch.

When she witnesses a confrontation between her best friend Bea and the infamous Emmeline Delacroix at one of Emmeline's extravagantly illicit parties, Annie is drawn into a glittering, haunted world. A world where magic can buy what money cannot; a world where the consequence of a forbidden blood bargain might be death.

A bunch of little things were making me uncomfortable, but the way the blood magic was used is the big one that made me stop. If the book engages with the way the blood magic is being used as something partly like a drug and explicitly as self harm then I'm not ready right now to read that book. If it doesn't end up engaging with those early themes then it's not a story I want to read at all. Either way, I'm stopping.

I like the way it uses three narrators for the audiobook, I'd happily listen to more of their work (singly or together). 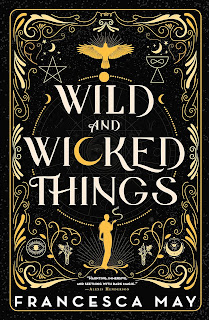