On the island of Kavekana, Kai builds gods to order, then hands them to others to maintain. Her creations aren’t conscious and lack their own wills and voices, but they accept sacrifices, and protect their worshippers from other gods—perfect vehicles for Craftsmen and Craftswomen operating in the divinely controlled Old World. When Kai sees one of her creations dying and tries to save her, she’s grievously injured—then sidelined from the business entirely, her near-suicidal rescue attempt offered up as proof of her instability. But when Kai gets tired of hearing her boss, her coworkers, and her ex-boyfriend call her crazy, and starts digging into the reasons her creations die, she uncovers a conspiracy of silence and fear—which will crush her, if Kai can’t stop it first.

*The first five books of this series were written and published out of in-universe chronological order. The comments in this review are based on reading the series in publishing order, where FULL FATHOM FIVE is read as the third book, after TWO SERPENTS RISE. At some future date I might do a chronological order read-through and redo the sequel checks accordingly.*

“…an echo looking for the noise that made it.”

FULL FATHOM FIVE is a mystery at heart, one of disappearances, murder, and corporate skullduggery. This series turns financial discrepancies into catalysts for desperate struggles, last chances, and tortured screams.

The worldbuilding is heavily influenced by the effects of settler-colonialism on island nations, and does some interrogation of what it can mean to continue after the cultural disruption brought by outsiders and the continued threat of force. The particular situation is one which fits the existing Craft Sequence universe, but based on a comment in the acknowledgements this specifically was influenced by Hawai’i, at minimum.

As for the magic and gods, this introduces the idea of idols which function similarly to gods in terms of contracts but don’t have an underlying consciousness. The bureaucracy surrounding this is specific to the island. The characters refer to some differences but generally they speak as though the idols they’re familiar with are their main reference, they don’t much refer to the Mainland gods (nor do they usually have reason to). There's also a disturbing form of punishment in the form of the Penitents, where a criminal (or anyone the people in power decide need correction) is put into a living statue which both forces their will to align with its justice-driven perception of the world. It's torture-as-correction, both mentally and physically, and it's explored in several ways throughout the book.

This doesn't specifically wrap up anything I can think of from the last book in original publishing order. It does feature an organization from that book so it follows naturally as a sequel in tone if not in plot. It has a new storyline where a bunch of major things are both introduced and resolved. It isn't the last book (not even in the canonical order as the fifth book, since there is a unambiguous sixth to follow), and it leaves open the question of what happens in the broader universe due to what happens at the end. The POV characters are new to this book and their voices are distinct from previous narrators in the series. It might make sense to start here, though there's a lot of worldbuilding which has been done in previous books (depending on reading order, two at minimum). It would probably still be enjoyable, but the characters take for granted a lot of information which is more explicitly untangled elsewhere, and having that information would make it much easier to appreciate this book's plot. Part of why this could stand alone is that there’s minimal focus on the Mainland gods, but also very little explanation of how the system of contracts as both worship and investments actually functions. 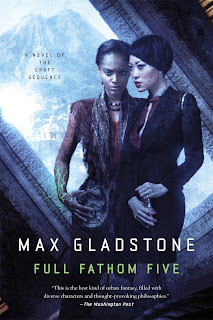