Allies of the Night by Darren Shan (Cirque Du Freak #8)

Vampire prince and "vampaneze" killer Darren Shan faces his worst nightmare yet - school. But homework is the least of Darren\'s problems. Bodies are piling up, time is running out, and the past is catching up with the hunters fast!

The tone of the book is still kind of upbeat even when things are going badly. Because of the narrative structure, Darren is narrating the events from some point after they happened, which means that sometimes he dramatically foreshadows how bad things are going to get later. Earlier in the series this helped establish the overall tone, but now Darren doesn't do it quite as often (though still sometimes) and it feels like a change in him as he's slowly growing up.

This doesn't do much original worldbuilding, except when Darren ends up back inside a school for the first time since he became a half-vampire. Since it's the second book in a trilogy subsumed within a longer series, it also doesn't need to build much new.

I wish Harkat had a bigger role, he's mostly a sounding board whose advice Darren doesn't end up following, though the fact that all this happens when he was ignoring advice seems important.

Darren runs into someone he hasn't seen in a long time, and he tries to excuse his childlike appearance by kind of pretending to have a condition that means he looks like a kid even as an adult. Since (other than the blood drinking) it does explain the outward (lack of) changes caused by vampirism it does make sense, and it works as an excuse partly because conditions which cause someone to appear very young even into adulthood do exist.

This continues the quest begun in the last book by heading to Mr. Crepsley's original city. This means that it's returning both to something left hanging rather recently (the ongoing hunt for the Vampaneze Lord) and also circling back to a place and at least one character not seen in a long time. This is a continuing storyline, but this phase of the quest features a place not mentioned recently, which makes it feel like its own thing. It leaves something for later, but I won't spoil what. It ends on a bit of a cliffhanger, so I'm hoping it wraps up some things in the next book.

Darren is older than he was when the series began, but the way he's slowly aging (and the fact that he's been spending all his time around vampires) means that he's not where a human of his apparent age should be in modern society, a disconnect which this book is meant to point out. Part of the arc of the series is the way that his new life has changed him into someone that his earlier self might not recognize, and there's a human character in this one whose presence helps to point out those disconnects in the moment.

I don't think this one would make sense if someone started here and hadn't read the rest of the series. It requires you to know too much in order for any of it to have emotional weight, and the last good entry point for all of this was VAMPIRE MOUNTAIN. This is midway through a quest which is only important because of stuff that went down at the mountain and during Darren's trials, so if you don't know what either of those are but you're intrigued by this review I definitely recommend going back to the start of the series.

This is a nostalgia tour mixed with a quest and a life-or-death expedition, which is perfect for where this fits into the series. I like this one a lot! 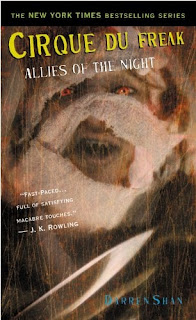