The Queue by Basma Abdel Aziz

In a surreal, but familiar, vision of modern day Middle East, a centralized authority known as ‘the Gate’ has risen to power in the aftermath of the ‘Disgraceful Events,’ a failed popular uprising. Citizens are required to obtain permission from the Gate in order to take care of even the most basic of their daily affairs, yet the Gate never opens, and the queue in front of it grows longer.

Citizens from all walks of life mix and wait in the sun: an activist journalist, a sheikh, a poor woman concerned for her daughter’s health, and even the cousin of a security officer killed in clashes with protestors. Among them is Yehya, a man who was shot during the Events and is waiting for permission from the Gate to remove a bullet that remains lodged in his pelvis. Yehya’s health steadily declines, yet at every turn, officials refuse to assist him, actively denying the very existence of the bullet.

Ultimately it is Tarek, the principled doctor tending to Yehya’s case, who must decide whether to follow protocol as he has always done, or to disobey the law and risk his career to operate on Yehya and save his life.

Written with dark, subtle humor, The Queue describes the sinister nature of authoritarianism, and illuminates the way that absolute authority manipulates information, mobilizes others in service to it, and fails to uphold the rights of even those faithful to it.

“…but the truth was, he couldn’t leave it. His body came and went, but his will was trapped here.”

THE QUEUE is a slow-burn bureaucratic dystopia following the increasingly complicated web of regulations, restrictions, and inconveniences imposed by a society 1) requiring everyone to get documents and permissions from a particular building to get anything done and then after a failed revolution 2) “temporarily” closing the building.

The narration is matter-of-fact, dispassionately relaying the increasingly convoluted circumstances as every character figures out their own way to adapt to life in the queue. It gives the whole thing a bleak air, punctuated by brief happiness and grounded by dashed hopes. The underlying elements are quite simple, but the characters' woes are deaths of a thousand cuts as the fact that they need something from this building and cannot (currently) get into the building combine over and over to create problems for everyone, which are sometimes temporarily solved by workarounds, and those workarounds fail to address the underlying constraints. The audiobook narrator’s voice suffuses the story with a wry wit, understanding that it’s an incredibly bleak story but able to make the happy moments bright along the way (for as long as they last).

The main characters are a doctor in a government building who is tracking down a discrepancy in some patient files, and then a bunch of people waiting in the Queue. Gradually they do more things away from the Gate, but every action, no matter its location, has something to do with the Queue and with the Gate, even if incidentally.

The plot meanders as every bit of progress made is either stymied by eventually requiring paperwork only obtainable by waiting in the queue, or made by ignoring the Gate entirely and existing wholly in the Queue. The most urgent needs revolve around attempts to get medical care for oneself or others, including one man who is trying to get a bullet removed from his torso, the difficulties begin when the Gate refuses to acknowledge that any guns were fired in the event where he was shot. Things slowly deteriorate from there, mentally, physically, and bureaucratically, as the whole city is being gaslit and many of them start to believe the lies despite the evidence in their own memories.

Dry and bleak in all the best ways, read THE QUEUE for a dystopia borne of bureaucratic demands, futile paperwork, and bullets fading beyond memory even as every breath draws blood.

*One of the main characters has a bullet lodged in his body. It's discussed like a chronic and likely terminal illness if not treated, except that it's a bullet and not an illness. 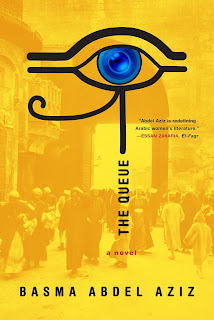