It has been foretold: A child will rise to defeat the Eternal Khan, a cruel immortal god-king, and save the kingdom.

The hero: Jian, who has been raised since birth in luxury and splendor, celebrated before he has won a single battle.

But the prophecy was wrong.

Because when Taishi, the greatest war artist of her generation, arrives to evaluate the prophesied hero, she finds a spoiled brat unprepared to face his destiny.

But the only force more powerful than fate is Taishi herself. Possessed of an iron will, a sharp tongue--and an unexpectedly soft heart--Taishi will find a way to forge Jian into the weapon and leader he needs to be in order to fulfill his legend.

What follows is a journey more wondrous than any prophecy can foresee: a story of master and student, assassin and revolutionary, of fallen gods and broken prophecies, and of a war between kingdoms, and love and friendship between deadly rivals.

Jian is the Hero of Prophecy, the central figure of an entire religion. But the prophecy was wrong, a new master says he's not ready to fight, and it seems like everyone wants him dead.

I savored this, I genuinely didn't want it to be over because it does so many things so well. Jian starts out as a kind of annoying kid and then gradually transforms into a less annoying young person who has finally had to make hard decisions and live with the consequences. Taishi is a war artist who teaches Jian because his former teachers were mucking it up and she couldn't stand for it. She's curmudgeonly and extremely competent in that way that fits her character, and her dynamic with Jian is what he needs without being what he wants.

The worldbuilding is rich and detailed, with an immersive style where things are only explained as the characters have reason to think of that specific detail, and even more is conveyed through their interactions. The various factions are introduced gradually and it was pretty easy to keep track of everyone because they have distinct and memorable backgrounds and goals which are shown when they first appear. I generally have a lot of trouble keeping track of character names but I did much better this time because of how they were handled.

The explanation for how the prophecy could go wrong is nuanced and fits the world so well, it's really well done. The plot has slower times of travel or hiding, punctuated by violence when the various factions run into each other. They have different things they want which all center on a couple of people, and some of those goals are fundamentally incompatible. The pacing is good, the calm times are usually filled with smaller bits of character growth (something Jian sorely needs).

This is fantastic, a must-read for lovers of fantasy, revolution, and assassins. I'm looking forward to the sequel! 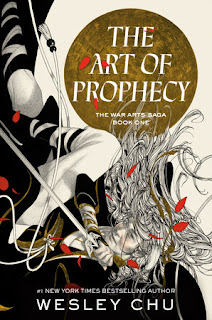