Elder Race tells the story of Lynesse, the (low ranking) Fourth Daughter of the queen.

Although no-one else appears to agree, she believes that the only way to rid her land of the demon that terrorizes it is to invoke the pact between her family and the Elder sorcerer who has inhabited the tower for as long as her people have lived here. Hundreds of years, at least. Maybe more.

She’s told she mustn’t. She does so, anyway.

But Elder Nyr isn’t a sorcerer. He has power, to be sure, but he shouldn’t even be speaking with these people, for fear of breaching an ancient directive. Nevertheless, he decides to accompany Lynesse on her quest for what his knowledge of science tells him cannot possibly be a demon…

"How much worse to think yourself wise, and still be as ignorant as one who knew themselves a fool?"

Lynesse braves her mother’s wrath to beg help from the sorcerer in his tower to fight demons invading the land. Nyr awakens after 200 years asleep to discover that his one big adventure is now history, and he must decide whether to help once more, or to retreat into his anthropologist’s detachment.

The worldbuilding blew me away. There’s a well-described communication gap between the main characters. It’s beautifully executed, and is such a wonderful way to portray artificially-assisted translation in real time. This means that for everything that’s happening, the two main characters have unique vocabulary for describing the scene and different understandings of what’s relevant. It generates depth and meaning in the narrative through something that sci-fi often handwaves away.

The narration is asymmetric, Nyr narrates in first person but Lynesse narrates in third person. This could mean anything from slightly favoring Nyr’s version of events to indicating that whatever Lynesse is speaking doesn’t translate into first person the way Nyr’s thoughts do. Nyr deals with technologically-assisted disassociation, meant to help him cope with stress in the moment and then exacting a heavy toll later. Narratively, this works to show the level of technological entanglement Nyr has on a moment-to-moment basis, distancing himself from the locals even while he’s helping them.

This is excellent, a story which uses the genre entanglement of sci-fi and fantasy to its utmost, creating something that couldn’t happen with either alone. 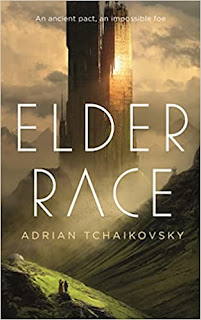