Hunters of the Dusk by Darren Shan (Cirque Du Freak #7)

The pursuit begins....Darren Shan, the Vampire Prince, leaves Vampire Mountain on a life or death mission. As part of an elite force, Darren searches the world for the Vampaneze Lord. But the road ahead is long and dangerous-and lined with the bodies of the damned.

HUNTERS OF THE DUSK returns to Darren six years into the war with the Vampaneze, when he's sent out to hunt for the Vampaneze Lord. The problem is they don't know who that is yet, and their chances to end things once and for all are dwindling with every botched encounter.

After a while at the mountain, most of which was spent at war between books, it's time for another journey saga. One thing that stands out is the storyline with Vancha, there's a lot of intense stuff with self harm and suicidal thoughts, framed as a one-sided fight with the sun that seems in keeping with Vampire society as a whole. It allows for a very intense discussion about this topic while couching it in a layer of absurdity, and the whole thing works very well.

This is the start of a new arc in the series, and so even though it technically continues the war begun in the last book, it does so in a manner that could work almost as well as an introduction for anyone jumping in midway through the series. It has a new storyline which introduces several new things and doesn't really resolve any of them, since this is the first book in a three-book arc. It leaves a lot for later, and reminds the reader of the status of some open plot threads but doesn't close any one thing that I can think of. Darren definitely sounds older than he did before, which makes sense in terms of both age and experience.

The plot is that Darren has to leave the mountain with some companions in order to do a quest, one which will likely take a while to complete, but upon which hangs the fate of all the vampires. This isn't my favorite in the series so far, not because it gets anything wrong per se, but because it's hard to dazzle in this in-between state of a new plot arc midway through an ongoing series. It has to do a lot of setup without getting the opportunity for a lot of payoff, though I trust that'll arrive soon.

A good entry in the series overall, and I'm looking forward to the next one. 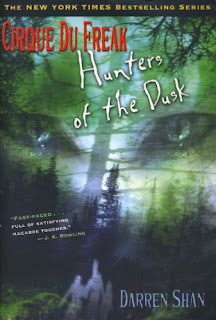