In near-future Los Angeles, a stranger new designer drug called Snow Crash is making zombies of everyone, and a deadly computer virus is striking down hackers everywhere. Hiro Protagonist, Last of the free-lance hackers, greatest swordfighter in the world, stringer CIA, is the last great hope of this post-modern landscape.

SNOW CRASH is a cyberpunk fantasy starts with a high-stakes pizza delivery and ends with some cool explosives, taking a path that leads through many burbclaves, at least one cult, and a lot of exposition that relies on fascinations explanations of ancient Sumer to discuss a computer virus that's messing up brains.

It's using and remixing available stereotypes to their limit to create cartoonishly distilled essences that allow for quick action in the partitioned but not wholly divided setting. There are stark boundary lines all over the place, governing laws, behavior, and life-or-death stakes for everyone within these borders, lit by each Franchise's signage and governed by their franchisee manuals. Where the grooves of life are so well worn around most denizens that they barely notice a disturbance to their routines, unless they’re the protagonist, Hiro Protagonist or perhaps the Kourier Y.T. There's a franchise for most things, and some of those things are racism. There's some fatphobia and scattered ableist language which seem to be regular levels of bigotry instead of forming the kind of pointed social commentary which underpins and incorporates the other -isms.

Hiro’s biracial identity (Black/Japanese) matters to the story and exists for more than the surface-level excuse to name the main character “hero protagonist” with alternate spelling. There are several moments where he figures out things based on how someone reacts (or doesn’t) to his appearance and background.

Y.T. isn't as introspective as Hiro, but she gets a decent amount of focus and her perspective is integral to the story, both as an active agent and as an observer with a very different point of view from Hiro, a non-hacker one.

As a cultural artifact, this feels more prescient than it perhaps has a right to be because a lot of people have tried to make things more like the world imagined here, and that's not always a good thing. Reading it now is strange because even something like the word "avatar" as a representation of one's physical self in a digital context was popularized by this book and so it doesn't feel new, though it was at the time. 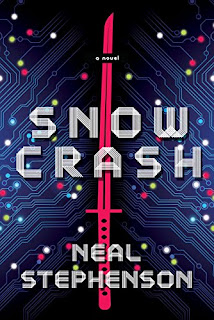