Spin Me Right Round by David Valdes

From lauded writer David Valdes, a sharp and funny YA novel that's Back to the Future with a twist, as a gay teen travels back to his parents' era to save a closeted classmate's life.

All Luis Gonzalez wants is to go to prom with his boyfriend, something his “progressive” school still doesn't allow. Not after what happened with Chaz Wilson. But that was ages ago, when Luis's parents were in high school; it would never happen today, right? He's determined to find a way to give his LGBTQ friends the respect they deserve (while also not risking his chance to be prom king, just saying…).

When a hit on the head knocks him back in time to 1985 and he meets the doomed young Chaz himself, Luis concocts a new plan-he's going to give this guy his first real kiss. Though it turns out a conservative school in the '80s isn't the safest place to be a gay kid. Especially with homophobes running the campus, including Gordo (aka Luis's estranged father). Luis is in over his head, trying not to make things worse-and hoping he makes it back to present day at all.

SPIN ME RIGHT ROUND pits Luis's stubbornness and optimism against the sudden reality that he's found himself transported to 1985. His school that is homophobic in the 21st century was even worse in the 1980's, and his one goal is keep fellow gay kid Chaz from dying like he did the first time around. The school is canonically racist in addition to being homophobic, and the characters discuss this as a factor without splitting the story's focus too much, using it as a point of solidarity to fight the school's generally bigoted posture.

The worldbuilding worked well, drawing comparisons to Luis's starting time to help any readers who weren't around for the 1980's. Since my own knowledge of the 1980's comes mostly from things like Back The The Future, one of this book's inspirations, I appreciated the brief explainers and I don't think they slowed down the story. Having a protagonist who also didn't already know how the 1980's had worked made the level of background provided feel believable and appropriate. Luis's assumptions and reactions change several times in a very natural way as he tries to adjust to being a person out of his time. I'm glad he has help from someone who believed him about his situation. Ms. Silverthorn is helpful but not overbearing, supporting while leaving Luis mostly to handle his problems in his own way. The teenagers have individual reactions to Luis's antics and the whole tangle of friends, acquaintances, and bullies was complex and felt real.

I loved reading this, it's so nice to have an accidental time travel story with genre-savvy characters. I liked the ending, it showed how much Luis grew throughout, becoming a better and less self-centered person. 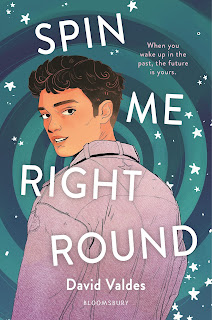