For the first time, an Empress Redemptor sits on Aritsar's throne. To appease the sinister spirits of the dead, Tarisai must now anoint a council of her own, coming into her full power as a Raybearer. She must then descend into the Underworld, a sacrifice to end all future atrocities.

Tarisai is determined to survive. Or at least, that's what she tells her increasingly distant circle of friends. Months into her shaky reign as empress, child spirits haunt her, demanding that she pay for past sins of the empire.

With the lives of her loved ones on the line, assassination attempts from unknown quarters, and a handsome new stranger she can't quite trust . . . Tarisai fears the pressure may consume her. But in this finale to the Raybearer duology, Tarisai must learn whether to die for justice . . . or to live for it.

REDEMPTOR is a story of love, friendship, promises, and exploitation as Tarisai strives to end, once and for all, the cycles of poverty and violence that have heretofore been the social and economic underpinnings of the Empire.

In the first half, because Tarisai needs to get her own council it felt like she was doing again something we already saw the first time around. Much of the early book is figuring out what she needs to do, accepting that it's really the same thing that happened in book one and then doing it, which made it the pacing drag for me. Also by adding a second council of equal number to the first, it made the character list feel enormous and meant I had trouble feeling like I got to know more than a handful. I'm not new to large casts in fantasy, but normally there's more stratification in how important they are to the main character(s). In this, there was text telling me how important they all were, but not enough room to show scenes of all of them being very important in a way that showed that connection rather than just telling.

The second half is where it really shines, with answers to what was plaguing her in the first half, events moving more quickly, and a really fantastic ending to the duology. It proposes to answer immensely complicated questions in a very small space and finds a resolution to them which fits this context and characters. In a world where the Ray exists, it's a good answer.

The Underworld is interesting and well-described, the worldbuilding really shines there even though it's a relatively short section. The rest of the worldbuilding is very robust, with special care given to the descriptions of clothing from various parts of the Empire. It feels like a lived-in world, even in the small part of it that the story has time to cover directly.

This wraps up a very major thing left hanging from RAYBEARER. It has a storyline which starts here and wasn't present before, with several major things that are both introduced and resolved in this volume. It is the last book of the duology and it wraps up pretty much everything left hanging while also giving a vision of what the basic trajectory is for these characters after the book is over. It feels finished, which is good since there aren't any more planned in the series. The main character is the same as before, Tarisai, and her voice is consistent in this book. This wouldn't make a lot of sense if someone started here without reading RAYBEARER. This is book two of a two-part series, so please start with RAYBEARER. There's enough explanation that someone could probably get settled enough to enjoy the ride after the first 20%, but really it needs the first book to be whole. 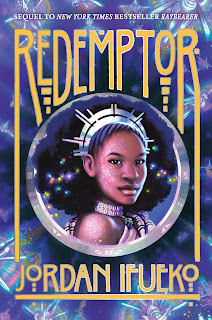