Imagine an America very similar to our own. It's got homework, best friends, and pistachio ice cream.

There are some differences. This America been shaped dramatically by the magic, monsters, knowledge, and legends of its peoples, those Indigenous and those not. Some of these forces are charmingly everyday, like the ability to make an orb of light appear or travel across the world through rings of fungi. But other forces are less charming and should never see the light of day.

Elatsoe lives in this slightly stranger America. She can raise the ghosts of dead animals, a skill passed down through generations of her Lipan Apache family. Her beloved cousin has just been murdered, in a town that wants no prying eyes. But she is going to do more than pry. The picture-perfect facade of Willowbee masks gruesome secrets, and she will rely on her wits, skills, and friends to tear off the mask and protect her family.

Darcie Little Badger is an extraordinary debut talent in the world of speculative fiction. We have paired her with her artistic match, illustrator Rovina Cai. This is a book singular in feeling and beauty.

ELATSOE is a thoughtful and vibrant story about grief, truth, and life, as Ellie tries to fulfill her cousin’s last wishes and stop his murderer (with the help of her ghost dog). It's a coming-of-age story, where Ellie is figuring out the bounds of what she can do, and what responsibilities come with her heritage (spiritual, magical, and mundane).

I love how this feels to read. It’s kind of a murder mystery, except Ellie is trying to prove how the murder happened since she’s been told who did it. I like the way that stories and memories are woven into Ellie’s narration. It makes them feel like part of her thoughts, as they so clearly are. She’s so full of stories that her point of view wouldn’t feel complete without them. She’s deeply connected to her family, and looks up to her Six-Great Grandmother as example and inspiration.  The worldbuilding is good, it’s shown through Ellie’s perspective in a way that feels effortless. It’s a world where ghosts, vampires, and fairy ring teleportation coexist but don’t all follow the same guidelines, and this does some pretty cool things with adherence to the clashing rulesets. 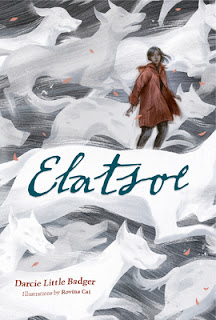