Within These Wicked Walls by Lauren Blackwood

Andromeda is a debtera—an exorcist hired to cleanse households of the Evil Eye. When a handsome young heir named Magnus Rochester reaches out to hire her, Andromeda quickly realizes this is a job like no other, with horrifying manifestations at every turn, and that Magnus is hiding far more than she has been trained for. Death is the most likely outcome if she stays, but leaving Magnus to live out his curse alone isn’t an option. Evil may roam the castle’s halls, but so does a burning desire.

Queer Rep Summary: No canon queer rep, but at least one character reads plausibly as demisexual.

WITHIN THESE WICKED WALLS has ill-advised romance, ghosts, and past abuses in a tangled and emotionally-rich story of haunting and moving on. It asks what we owe to those who tried their best but hurt us anyway.

I like the setting and the worldbuilding, the house and the curse are pretty well described. The characters are the best part, with various blends between relatability and detestability. At several points Andi encounters something that's new to her but well-known to the other characters (and definitely known to the author), and the way they're described is so precise and interesting. I like strange descriptions of things. There's particular moment where she sees, for the first time, a food I know very well but which I had to figure out along with Andi because of how she approached the description. It captures the feeling of figuring out something for the first time and it reinforces the character generally, fitting in with her previously limited realm of exposure. , and I was initially thrown by her description

I know the plot is like this because it's a Jane Eyre retelling, but I'm too demi to click with stories of instant attraction and there didn't seem to be much buildup before Andi was interested in Magnus. This is a quick attraction with interpersonal obstacles discovered after the spark is lit, and even those difficulties lingered just as long as necessary for narrative tension before melting away in an instant. It's a particular flavor of romance and not one that suits me well. It's also an employer/employee situation, with the associated power imbalances intact (but remarked upon, and I appreciate the level of self-awareness).

There are themes of abuse from a parental figure who is a secondary character, and I think it usually finds a way to make that character understandable without minimizing the abuse. I never got to like him, though. Andi is very much putting up with his current level of abuse because she needs something from him. It is a nuanced take on this dynamic, and I like the level of care involved in the narration. It focuses on the shape of how Jember's brokenness hurt Andi in turn, and there's a gradual process of them coming to terms with who they were to each other and setting a new standard for what they want to be now. It's very well done, and while they balance they strike isn't what I would want for myself, it genuinely seems to work for the two of them.

CWs from the author: Some of the thematic material in Within These Wicked Walls discusses death, body horror, and physical and emotional abuse from a parental figure. For a more detailed description of sensitive content please visit www.laurenblackwood.com. 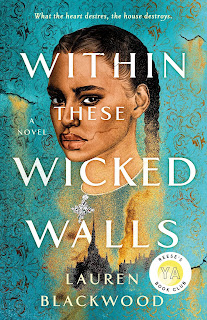