It is not a peaceful time in the Dells. The young King Nash clings to his throne while rebel lords in the north and south build armies to unseat him. The mountains and forests are filled with spies and thieves and lawless men.

This is where Fire lives. With a wild, irresistible appearance and hair the color of flame, Fire is the last remaining human monster. Equally hated and adored, she had the unique ability to control minds, but she guards her power, unwilling to steal the secrets of innocent people. Especially when she has so many of her own.

Then Prince Brigan comes to bring her to King City, The royal family needs her help to uncover the plot against the king. Far away from home, Fire begins to realize there's more to her power than she ever dreamed. Her power could save the kingdom.

If only she weren't afraid of becoming the monster her father was.

FIRE is about tangled pasts, hidden things, and a girl trying to be her own person when all she sees in the mirror is her father's face.

It’s emotionally complicated in a way I wasn’t expecting, a story about how love and people are multifaceted, and that complexity means they can be kind and cruel. Fire’s memories of her father are given the space to slowly unwind, making his brutality and manipulation clear. It would be so easy to have written it like his care for her was a redeeming quality, but it’s not treated that way. In her present-day relationships, Fire is figuring out how to exist without feeling like her every action is a replica of her father’s monstrosity. The emotional journey of coming to terms with having been loved by a cruel person is a fraught one that is handled well here. It’s especially refreshing to have this topic handled in a way that has nothing to do with forgiveness or reconciliation, since her father is long dead before the story begins.

FIRE is full of secrets, dripping with them. Almost every named character (and definitely all the noble ones) either grow and change themselves, or Fire learns something about them that complicates her understanding of them. Sometimes they're new events, but more often it's something that's been true for a long time, with knock-on effects seeping into her life even when she didn't know. It works especially well in a story about a protagonist growing up and taking on both more adult responsibilities, and a more nuanced understanding of the world as her childhood understanding of things slowly cracks and shifts to incorporate more of what people are and what they can be.

This is book two in the series but chronologically takes place before the events of GRACELING. It’s well-placed here, since an explanation of some key events in FIRE would spoil a mystery central to GRACELING, but it does make my usual sequel check a bit tricky. It doesn’t wrap up anything from the first book but it does supply some backstory for an important character. The entire plot starts here and wasn’t part of GRACELING, and many things are both introduced and resolved in FIRE. It doesn’t specifically leave anything open to be addressed later, but it’s my guess that some of these characters will appear later in the series. The narrator is different from GRACELING, and she feels like a very different person than the previous narrator. This would mostly make sense if read without having read the first book, but both books would suffer in the telling if FIRE is originally read without a central bit of knowledge and then GRACELING is later read for the first time with that information.

This is a great book and a worthy sequel, continuing GRACELING's themes of secrets and damage in a whole new kingdom and (almost) entirely new cast. 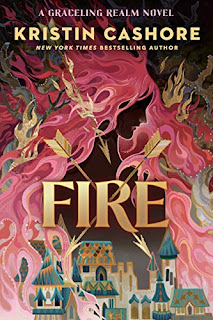