Dame Grace Hensley helped her brother Miles undo the atrocity that stained her nation, but now she has to deal with the consequences. With the power out in the dead of winter and an uncontrollable sequence of winter storms on the horizon, Aeland faces disaster. Grace has the vision to guide her parents to safety, but a hostile queen and a ring of rogue mages stand in the way of her plans. There's revolution in the air, and any spark could light the powder. What's worse, upstart photojournalist Avia Jessup draws ever closer to secrets that could topple the nation, and closer to Grace's heart.

Can Aeland be saved without bloodshed? Or will Kingston die in flames, and Grace along with it?

After any great and dramatic heroic gesture comes the aftermath, the fallout, the nitty gritty of picking up the pieces of a shattered world, sorting through the detritus of a broken system. Stormsong sits in that discomfort, finding just how much has broken.

The events of Witchmark revealed the rot which underlay their comforts and conveniences, and Stormsong sees them reckon with the messy nature of moving towards justice. Shifting MCs from the first book allows for focus on a different angle. Where Witchmark began as a mystery story then became embroiled in politics, Stormsong starts with the practical and political consequences of the events in the first book, then rapidly transforms into a mystery... of how to deal with those events and also solve a murder. The story was engaging, the characters were great, and the romance was a tender mix of implicit and overt that really worked for me. It's sweet without being cloying. I thought it was going to be more of a political thriller than a detective story, and for the first third it is, but then it turns and becomes this excellent mix of both in a way that reveals there were mystery elements all along.

This story is deeply concerned with the multifaceted ramifications of what it means to not just stop current atrocities but to bring a reckoning; to break what must be broken and build anew. There was a scene with some political machinations that I was really excited about (and it remains a fantastic scene), but there's an event later on which re-contextualizes it. It's not that the narrator is unreliable, exactly, but she definitely has a perspective that makes her less aware of certain issues, especially early on. However the author definitely was aware, and there are events later in the book which challenge her understanding of certain events. It was a really good portrayal of someone partway through restructuring their worldview, then needing to adjust even more.

As for my usual check whenever I read book two of a trilogy, this is a great entry. It establishes characters well enough to make sense just within this story in case someone missed the first one, but does it in several clever ways to make the plot recaps feel natural. Grace is consistent with her characterization from the first book (where she wasn’t the MC), but her perspective in this book feels pretty complete, and her voice is distinct from Miles, the previous MC. Some events left over from the previous book are settled, there’s a full storyline that fits just within this book, and also there’s a pretty major element left to be handled in the final book. Overall this is a great book and an excellent midpoint to the trilogy. 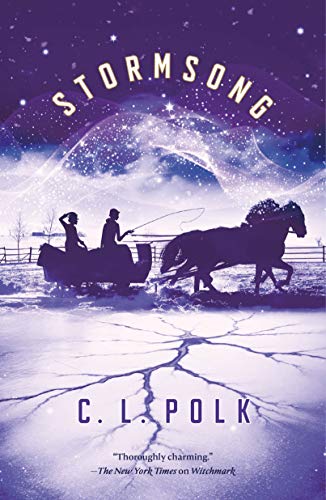