Unbirthday is crisp and strange; an excellent, gripping retelling of Alice in Wonderland. Drenched in red paint that slowly turns to blood as time runs out. A good balance of wit and whimsy with a lot of growing up.

Alice in Wonderland stories are at their best when the Alice is taking her lessons from Wonderland home to deal with the real world, and this carries that on very well. The real-world characters felt grounded, the Wonderlandians were whimsical, and Alice strives to work with the best of what the two worlds have to offer her. It brought up real-world issues that feel particularly resonant right now because they're the kind of problems that are (sadly) evergreen.

One of the little things I look for in any Wonderland retelling is how they'll handle the mirror moment, and this one was particularly good, I think it's my favorite scene in the whole book.

I loved this book. The original characters were great, the referential characters had flair consistent with the originals while carrying their essence into a whole new thing. Alice is closer to grown up and the whole thing has room to be a bit darker than before. Alice spends some time in her own world as well as Wonderland, and there’s a lovely premise connecting the two that was well-executed to bring in some of the macabre.

Retellings always have to choose what balance they’ll strike with the inspiration for their tale, and this unabashedly feels like part two of a story where part one was perhaps the original duology but more likely it was the version from Disney (which is quite appropriate for this particular series). I think it would be understandable to anyone unfamiliar with the source material, but your experience will definitely be improved if you have at least a passing familiarity with the story. 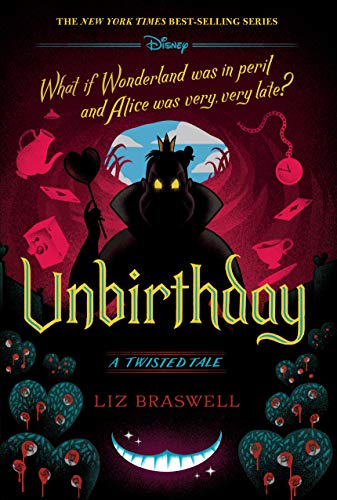