Destiny: Child of the Sky by Elizabeth Haydon (Symphony of Ages, #3)

Destiny is a good but stressful conclusion to an excellent trilogy. Many secrets are brought into the light, but not until after winding the tension for ~500 pages. Great characters; layered world-building; a good slow burn for fantasy-lovers.
The story is great, it's well paced, and I love the characters (or have very specific, complex, and well-explained reasons to dislike them). I had enough of a rapport with them from the first two books to be very invested in this one, and that helped me get through the approximately 60% of the book where someone was missing very vital information. The characters continued to learn and grow from their appearances in the prior books and I'm very please with this as the conclusion of a trilogy. Enough things are settled to give a sense of a finality while being very clear that everyone is going to have a full life after this chapter of their story is over.
This was an incredibly stressful book for me to read because it is full of a specific trope that never fails to make me anxious: some combination of secrets and lies means that people are doing and saying things they wouldn't do if they had information they ought to have. It's the reason I generally can't watch sitcoms, as well as the reason I never finished watching the movie Ratatouille, and it made this book very difficult to read. The book is very aware of the needless anxiety and strife caused by this scenario, but that didn't make it much easier as an experience. The tropes were expertly wielded and given appropriate explanations, which didn't reduce my stress level much but I did appreciate that from a world-building perspective. I'm very glad I read it, and for anyone who has a similar anxiety I will reassure you now that it's given appropriate weight and then a very good resolution to the tension, but that tension is present for the majority of the text.
Destiny continues this trilogy's theme of bodily autonomy, how it is sometimes respected and other-times ignored. It grapples with themes of consent, personal agency, and mutual respect. Some very dark things happen in the book but it continually spares the reader the worst of that darkness. We are told about very traumatic things occurring without having to witness each excruciating detail because we are instead seeing the impact on the sufferer and those around them. When we are present for a traumatic event, it makes sense within the already dangerous world. I appreciate how this book doesn't make me feel like a voyeur of trauma, but instead impresses how terrible such things can be with precisely the level of detail necessary for the story and no more. It stands out that, in a book that deals with themes of consent and assault, the most stressful thing for me was how many lies and misdirections were happening. Much darker and more serious things were in play, but the book did not pin its tension and emotional weight on torturing the reader with that darkness.
The framing device is brought to its own conclusion here, it began in Rhapsody, continued in Prophecy, and is given a suitable ending in Destiny. We learn so much about a character who only appears in a scant handful of chapters and I love how deftly they were handled. As for the main story, I know there are more books in this world, but even if my rather large TBR pile never lets me get to them I can be very satisfied with where this trilogy ended up.
CW for gaslighting, body horror, sexism, sexual assault, major character death, child death, death.
Bookshop Affiliate Buy Link 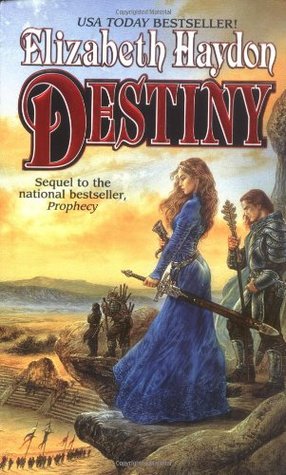