Power Inversion artfully pivots from Erin's despairing introspection in Power Surge to an interdimensional struggle to save everything and everyone they love, hopefully without losing too much of theirself in the process. Sometimes you just feel like a monster.

This book felt more fractured and surreal than the first one, at least partly due to the complicated mess of stuff the MC is trying to handle. Erin is conflicted within themself, trying to deal with revelations of family secrets, fear of their own identity, and disturbing visions of the future. The pace steadily ramps up as the characters stop getting real chances to rest because the apocalypse pauses for no one. This creates a dynamic where there are no background problems, merely ones that are shoved to the side for just a moment in order to focus one something more urgent before everything crashes back in all at once. There are a few small lulls, tiny retreats to regroup but they never quite get a break.

I’m a big fan of world-building through chapter header quotes and I especially like the ones here. They help reinforce the sense of legacy and a fight that has spanned generations while also being positioned to hint at information that will become more explicitly stated in the narrative as the current characters figure things out.

The battles work really well, I like the blend of high-fantasy magic with a sci-fi shape that Erin brings to everything they do. It makes Erin feel like a real person who would have grown up with iconography from popular culture, so of course that affects the way they think about their newly discovered powers. It's a good choice for a series set in very specific calendar years in the real world. Erin's dreams tell them just enough to get some dangerously good ideas without giving away the plot to the reader.

The relationships feel more settled, more developed than in Power Surge. José and Erin have to handle some pretty momentous news early in the book, but they're able to handle it a lot better than either of them could have in the first book. It sets the tone for how they tackle the rest of the events, and it works really well overall. Erin still doesn't value their own life highly, but they're a little better at seeing how much they matter to other people, and more willing to show how much they care about the people in their life. Erin and Mel get to a much better phase of their relationship, but it's hard sometimes to be friends with your family, and they have a lot of baggage to get through before they can totally feel settled.

Book CW for violence, death, death of a minor character, temporary death of a main character, mention of past abuse, mention of miscarriage, pregnancy of side character, self-harm, suicidal ideation, guns, grief, kidnapping/abduction, alcohol use, brief description of humans enslaved by supernatural creatures. 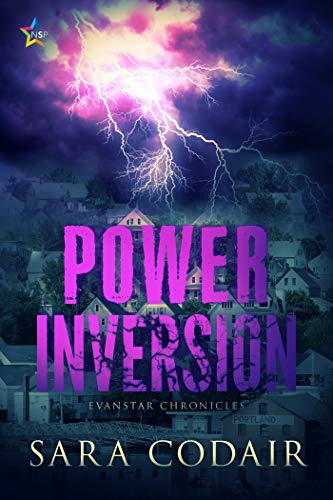